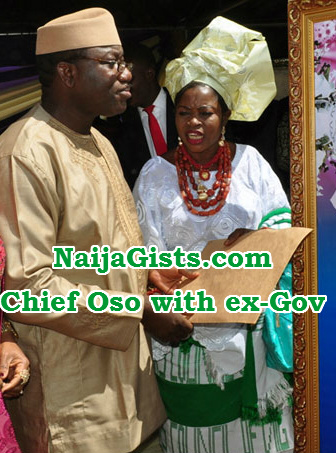 The Iyaloja of Ado Ekiti, Chief Waye Oso was yesterday detained at the police headquarters in controversial circumstances.

The market leader who spoke on telephone from police detention at about 8.30pm claimed that she was detained on the orders of Governor Ayo Fayose.

Mrs. Oso said she was told to produce over N93 million purportedly raked in from the shops allocated to market women by the Kayode Fayemi administration.

According to her, she did not collect any money from the Fayemi administration on the land and the shops allocated. She wondered where the Fayose government ‘manufactured’ the N93 million figure from.
The Iyaloja said she was picked up at her residence in Ekute, Ado Ekiti by about 40 policemen who laid a siege to her house.

Mrs. Oso said she knows nothing about the N93 million claims by the government and she never embezzled any money.

She recalled that Fayose arrested and detained her twice during his first term in office and the bus donated to the market women was forcibly taken away from her on the streets.

She said: “It was Fayemi that approached Oodua Investment to give us the land at Textile area to open up the place as an alternative market when he (Fayemi) said he wanted to demolish the main market but the market women advised him against such and he agreed.

“Fayemi facilitated the arrangement with Oodua Group and promised to give the documents to me (Iyaloja) and work was ongoing before the governorship election which he lost.

“Oodua agreed and we pay N3,000 per shop yearly but Fayose’s government came and asked us to be paying N10,000 per square metre.

“After fire gutted the main market (Oja Oba), Fayose promised to demolish it and build a new one and order that we move to the Awedele (Textile) market. We contributed money and was working on the place when government agents ordered us to stop work and obtain form.

“We were shocked as to what forms to obtain again on a land Fayemi gave to us free of charge.
“I want you to remember that he (Fayose) arrested and detained me two times during his last administration and the bus donated to our association by Governor Adebayo was taken away on the streets.

“It is very shocking that I am being humiliated like this because I have never heard of any part of Yoruba land where an Iyaloja is given this unfair treatment and I have contacted my lawyer, Otunba Bisi Egbeyemi on the development”.