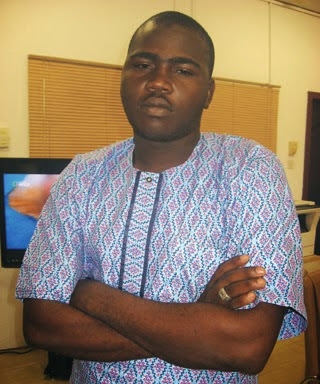 A 14-year old girl from Niger Republic has been rescued after she was forcefully married to a Bureau de Change operator in Yaba area of Lagos.

The girl (name withheld) was forcefully married to 25-year old Bashiru Yaya (pictured below) also from Niger Republic on 29 December, 2013 while the girl was still in Senior Secondary I at Ansarudden Academy at Randle, Surulere. The girl’s parents, Mr Hamidu and Mrs Abibat Ahmed were said to have taken the girl away from school while in SS I and married her out to Yaya as his second wife after he allegedly paid 300,000 Cefas, which is equivalent to N100,000 to them.

Officials of the Office of Youth and Social Development, Lagos State Government, however, got wind of it after the girl managed to smuggle a written letter to the office narrating how she was forced into marriage and her willingness to go back to school. The government officials went to her house at 57, Little Road, Yaba, to rescue her and later arrested Yaya and the girl’s parents. The girl was taken into custody of the state government and her husband was detained temporarily at the Taskforce office, Alausa before they were released later.

In the handwritten letter the little girl wrote, she made it known that she was never interested in the marriage, but that it was her mother, Abibat who spearheaded the whole arrangement against her wish.

“I was in SS I when I was forced into marriage, a marriage I never wanted and I am 14-years old. Never in my life have I thought of marriage when I was in school, although my father never accepted this marriage. It was my mum. My dad wanted me to become someone in life for me to be able to help the family the way he is doing. Before this entire marriage proposal started, they asked my dad about it but he said he did not want to give out his daughter in marriage until she finished schooling. The marriage took place on 29 December, 2013. I never loved the man and my mum knew about this all along but she refused and I am the man’s second wife,” she explained in her letter.

According to her, when she was in school, somebody closed to her introduced her to the Social Welfare Department of the Office of Youth and Social Development, which came to her rescue:

“I knew I should have found solution to this at the beginning, I thought of running away but I asked myself, would running away solve this?” she said, saying she decided not to run away but to look for other solution.

Special Adviser to the Governor on Youth and Social Development, Dr Dolapo Badru said the girl had the ambition of becoming a medical doctor before they married her out to a man who already had a wife.

“They stopped her from going to school and she sneaked out and we were able to rescue her. When we brought them here to my office, we asked the mother questions and she could not say anything. The girl implicated the mother in her petition. Her husband has disvirgined her,” he said.

Badru said the Child Rights law of the state government is against minor being married out and that such act attracts punishment according to the law, saying that government would ensure that the future of the girl is secure.

PMNews gathered that the girl said while she did not want to remain in the marriage and wanted to go to school, she did not want any of her family members jailed by the police over the issue. As they were taken to the taskforce office, the little girl, thinking that they wanted to detain her parents changed her story, saying that she loved Yaya and wanted the marriage, only that she wanted to complete her education first contrary to the letter she wrote.