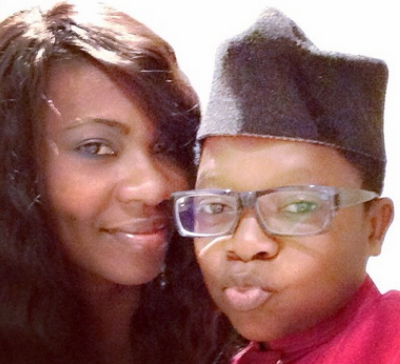 In this interview with LANRE ODUKOYA, comic Nollywood actor Chinedu Ikedieze alias Aki speaks about his latest cinema work, Lara and The Beat, childhood aspirations, being married and sundry issues.

How do you feel today that you’ve become famous and rich by the industry standard?

I feel happy and grateful to God that finally I can see that I’m living my dream. Of course, everybody wants to be better than who he is today. When I was growing up, I wanted to be in the limelight, I didn’t just want to make money, I wanted to be known as well. I think I’ve paid my dues and now deserve some accolades.

What are the prices you’re paying for stardom?

The kind of life I want to live sometimes, I realise that I cannot live it and it bothers me. I just want to follow everybody to the football pitch and play soccer like them, walk down the road without people trying to touch me and ask for the time I truly don’t have. Being a celebrity has taken away my privacy almost completely.

How is life as a married man?

Well, you can tell how life has been in marriage from the way my skin glows and the joy written all over my face. It’s been a beautiful journey really. But you know I really don’t talk about my family like that.

You played ‘Big Chi’ in the movie titled Lara and The Beat, how was the experience?

Big Chi is a larger than life character and I enjoyed playing it. I love it because I’d also been looking for the kind of role that pairs me with another person the whole industry knows me with. That tag team characterisation was beginning to bore me. Like I said, playing in the village setting where you wear tattered clothes and go about around the streams or the market shouldn’t just stereotype me. Of course you know I’m in The Johnsons series already. And that tells people how versatile I am as an actor. Lara and The Beat is a professionally done job. When I got on set, I realised that every single person was a professional. With the calibre of professionals I met, I didn’t have to sweat too much to deliver my part.

How was it like acting alongside the songstress, Seyi Shay, who was a ‘first-timer’?

Well, she tried. Initially, when we met on set for the first time, I saw a bit of naivety in her and she was confessing, “sorry o, it’s my first time”, I understood that and as time went by, she dug into the character, she started becoming Lara and she was awesome at the end of the day.

With the insight the movie gave into running a record label, would you consider delving into music business?

I’m an Igbo man first of all, so I won’t rule that out. As an Igbo man, we do businesses and maximize profits. So, whatever would make me earn more money, I can never be averse to it. I’m a movie producer already. I have short and I have another feature film I did that was shot in Dallas, United States, it’s titled: Take the Spotlight and it’s a Hollywood vs Nollywood movie.

At the time you started, the cinema culture hasn’t been imbibed, how does it make you feel to see yourself now on the big screen?

I’m so happy and it makes me realise that as we have this transformation and transition, I grow with the development. From the normal things we do like Enugu and Asaba movies to doing a sitcom in the leading city that has been running for four years now and being on set every passing day on the production is privilege I’m grateful for. I did a cameo appearance in the movie titled The Meeting and Omoni Oboli’s flick, First Lady, had previously brought me to the big screen. Owing to my time, they usually create a little space for me so that I can attend to other engagements.

Do you actually miss the village clown stereotype roles that made you popular?

The truth is that, it’s the kind of movies people want because they want to laugh. A lot of my guys in Europe and America always tell me; “my brother, those are the movies we want to watch.” They want something that would remind them of where they’re coming from. When you begin to do contemporary movies where you want to sound more American than Americans, they don’t like it. So, what I give depends on what the audience wants.

When setting out in life, what was the first thing you ever wanted to be?