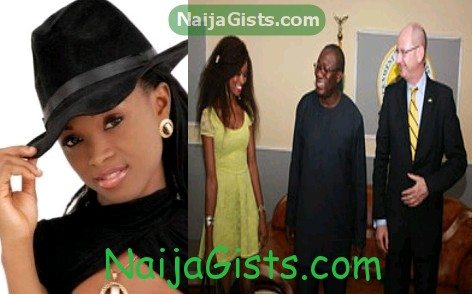 Model and ex- Koko mansion housemate Chioma Akuezue may have recently quietly got married to Consul General of the Federal Republic of Germany in Nigeria, Mr. Walter Von Den Driesch.

The couple was spotted last Thursday in Ado-Ekiti when they joined Governor Kayode Fayemi for a business dinner in the state capital.

It is not known when the marriage was consummated though Chioma is still being addressed with her maiden name, Akuezue.

Sources close to the Ekiti State government house confirmed that she was introduced as the wife of the Consul General which informed why the caption of the photograph of the couple with the governor sent to the media described Chioma as the diplomat’s wife.

Chioma could not be reached for confirmation at press time.

That marriage may come as a surprise to many close watchers who thought marriage may not at least be on the agenda for the ambitious pretty-looking entertainer who seems to have the world at her feet.

Though relatively unknown in some circles, Chioma was in the spotlight years back as one of the housemates of the one-off reality TV show, Koko Mansion.

She turned out to be one of the talking points of the reality TV show, but the musician who was 21 years old at the time was later evicted bringing an end to her stay in the house.

Her slender frame later lured her into modeling; a profession she is also passionate about.

She even described her biggest challenge in life as her desire to prove to those fashion organizers who hurt her ego a few years ago by telling her she wasn’t fit for runway modeling and instead concentrate her energy on her ambition to become a successful musician.