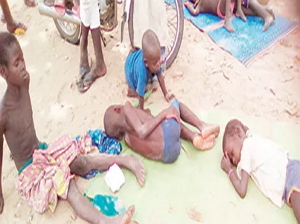 Not less than 13 people have been confirmed dead in the 160 cases of cholera outbreak at Gashua town in Bade Local Government Area of Yobe State. The inhabitants of Gashua have complained of bad water sources, urging government to provide good source of water supply to the areas.

It was reported last week that the victims were admitted at the hospital where six people died out of the 62 cases recorded. However, a laboratory test on 10 patients’ samples found eight positive, resting doubts whether the outbreak could be gastroenteritis. The Head of Record and Statistics of the hospital, Mr. Hassan Gadaka, told our correspondent that more deaths had been recorded, increasing the number to the death to 13 persons. He said: “From our records now, 13 persons have died out of the 160 cholera patients hospitalised.

Among the dead was a child from the 18 children under five admitted in the hospital. We thank Yobe State government for making frantic efforts, which led to the death being reduced. If the government had not quickly intervened and provided enough drugs and personnel, more people would have died.” Gadaka disclosed that the patients were brought from seven effected wards in Gashua town.

The wards are Yusufari, Sabo Gari, Lawan Musa, Katuzu, Lawan Fannami, Zango, Sarkin Hausawa, and Kachallari in Yusufari. The sanitation officer of Bade Local Local Government, Adamu Saleh, noted that government had embarked on sanitation campaign to break the route of cholera transmission.He said: “We have sensitised people to water purification techniques and other key household practices to improve hygiene and prevent spread.”

One of the residents of Gashua said that the only water sources they had were shallow boreholes mostly drilled at refuse dump sites. He added: “In most cases, both man and animal faeces on the dump sites contaminated the water. Unless government is willing to address this issue, cholera outbreak will continue to ravage our communities unabated. This has been happening to us every year without solution from the government.”

Continue Reading
You may also like...
Related Topics:chlora, kill, yobe