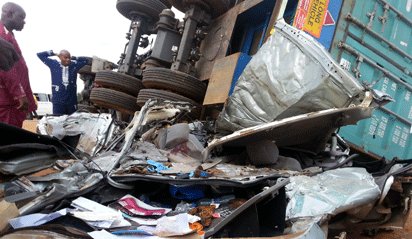 An unidentified couple met their untimely death on Friday the 23rd of December 2016 while they were returning from Sabo market in Sagamu area of Ogun state.

According to eyewitnesses, the couple had just purchased a fowl meant to celebrate the Christmas when a truck carrying steel from Ikorodu Lagos lost brake and rammed into the motorcycle conveying them.

The couple and the Okada driver reportedly died on the spot.

Here is what an eyewitness said about the disaster:

The driver of the ill-fated truck has been arrested by police.