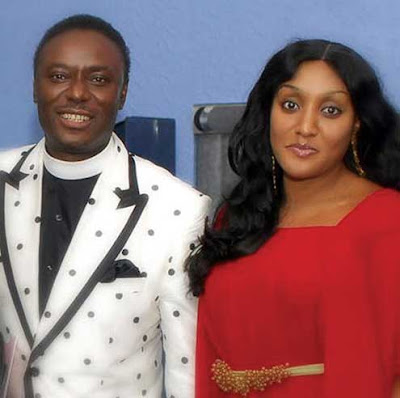 Stephanie Henshaw, the beautiful ex-wife of Reverend Chris Okotie, has opened up barely a week after their glamorous marriage crumbled and after the couple vowed to keep mum over what led to the break up.

The split, she said in an unusual outburst on Facebook, was caused by hateful members of Okotie’s Household of God Church with some even labelling her ‘a witch and a mermaid’.

The mother of three and now ex-wife to three men seemed to be struggling with emotions and sentences as she narrated how Chris Okotie, a former pop star turned pastor and politician was fed with false information concerning her.

“My husband loves and adores me, he is not the one saying these things; the enemies from within who hate me…they hate the grace God showed me, they hate the mercy God has had on me, so they come up with all kinds of lies,” she said.

In one post on Facebook, Stephanie accused Okotie, a three-time presidential candidate, of conniving with some unnamed members to accuse her of witchcraft and of possessing the spirit of the water goddess, popularly called mammy water or mermaid.

The post gave a hint that the members Stephanie was referring to are female admirers in the glamorous church.

“My going can bring one Mrs. Okotie, what happens to the rest of you? You bring shame to the body of Christ out of your jealousy and selfish desire and in the process expose your pastor,” she said.

“The work he has to do cost Jesus His life. Don’t joke with it; our friendship is not based on marriage. You manipulate things at the expense of God’s Work and name. It’s not about me, it has never been, it’s about the will of God.”

Okotie and Stephanie got married on 7 August 2008 in a glittering wedding in Lagos, southwest Nigeria, and remained married until when the funky pastor announced on 24 June that the marriage had collapsed due to irreconcilable differences.

Okotie’s Church’s spokesperson on 25 June issued a statement saying that the couple had decided not to disclose the reasons for the break up.

But Stephanie said:  “For the four years, he never fell ill, but today I am called all sorts of names, witch, mermaid spirit.

“I have served Jesus with clean hands and a clean heart, I have loved all that have come my way and if I don’t live through this pain and hurt, as sure as Jesus lives, my children will see my vindication.”

Stephanie, who has since changed her profile on the social internet site with her name now as Stephanie Adie Henshaw, said it was the hearsay from church members who crashed the much publicized marriage, adding that she had since packed out of Okotie’s house in Opebi, Ikeja.

“Today makes it three weeks I was asked for a separation, and a week and four days I packed out,” she said.

Going scriptural, Stephanie quoted Romans 8:28, which reads: ‘all things work together for the good of those who love God and are called according to his purpose for them.’

She said she was obedient and submissive during the four years the marriage lasted.

“Lord, I left that home blameless. Before you I have loved, but have never been loved, I have given but has not received, but that is contrary to Your word. Lord, so today I ask your word be made manifest in my life,” she said.

She confessed that she had known Reverend Okotie for 20 years and that they were very close friends for 15 of the 20 years.

“I prepared all his meals for 10 years including the four years we were married.

“The day I was asked to leave, I prepared his meal, served it and I left,” she lamented.

Stephanie’s outburst on Facebook came to many who know her as a surprise and although she has not denied the posts, some believe that her Facebook page might have been cloned.

Although Stephanie has not disclosed the hateful members who crashed her third marriage, mid-2007, when Okotie made his choice public, his church almost broke up as some female celebrities who thought they were the favoured candidates for ‘the post‘ of Mrs. Okotie, received the shocker of their lives when he settled for Stephanie, the unassuming woman in his glamorous church.

Ladies like Sola Salako, church administrator for several years and Okotie’s close aide; Vien Tetsola, a former Miss Nigeria; Ure Okezie, daughter of former minister, Dr. Okezie, and others, were rumoured to have left the church because of the announcement.

Celebrities such as Mofe Damijo and many others were also said to have simply quit Okotie‘s church then, while some have reluctantly returned.

Okotie’s marriage to Stephanie was his second attempt at matrimonial life. He was first married to Tyna his long time friend, but the marriage packed up after 17 years without any child.