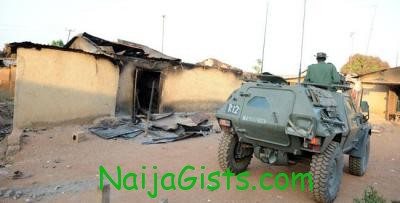 According to daily times, the death toll in clashes between Muslims and Christians in Plateau State has risen to 25, a local official said Saturday, following a mass burial that included four of his own children.

Pam Choji, a councillor in the Barkin Ladi local government council, who lost four children in Wednesday’s attack, said that 23 of the victims were interred on Friday.

He said the corpses of two other people who were shot dead in the clashes were expected to be buried on Saturday, “which will make 25 people that we would have buried”.

A Plateau State government spokesperson, Ayuba Pam, had said, on Thursday, that at least 12 people were killed in the clashes between ethnic Fulani, mainly Muslims, and Beroms, who are predominantly Christians.

Newspapers on Saturday, quoting an army spokesman, said more that 160 people had been arrested over the clashes, which appeared to result from reprisals carried out over killings that had occurred several days ago.

Plateau State lies in the so-called middle belt region between the mainly Muslim north and predominately Christian south of Africa’s most populous nation.

The area has been caught in a deadly cycle of attacks and reprisals that have regularly flared up for years.

Beroms and other mainly Christian ethnic groups are viewed as indigenous in the area, while Hausa-Fulani Muslims are seen as the more recent “settlers” despite the fact that many have been there for decades.

Separately in the countryside, clashes over land have occurred between Berom farmers and Fulani herdsmen.

Thousands have been killed in the unrest in the area in recent years.