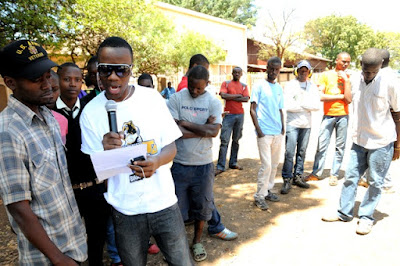 Operations at the Benin Coca-Cola plant of the Nigerian Bottling Company was abruptly halted on Friday by casual workers following the death of one of their colleagues whose name was given as Jerry Ayo.

The angry workers completely shut the plant located at Eyean in Uhunmwode Local Government Area of Edo State, while protesting the death of their colleague. They also barricaded the company’s gate and set-up bonfires.

Joined by relatives of the deceased, the protesters alleged that 21-year old Jerry died of electrocution while at work.

The protesters who prevented other workers from gaining access into the building, vowed to sustain the protest until the company issues a statement on what led to Jerry’s death, because, according to them, they had complained severally about electric leakages at the plant but that the management simply told them to go if they were tired of working.

Jerry was reportedly employed as casual worker at the Coca-Cola plant on the 20 April, 2015.

Uncle of the deceased who gave his name as Michael, said Jerry left home healthy but was brought back dead.

“His friends told us the production factory has leakages of electricity. They took the boy to their clinic without the consent of the family,” he said.

One of the casual workers who gave his name as Goodluck Osawe, said the deceased did not know that there were electric leakages in the plant, adding that “he was in coma and they did not tell us.”

Head of Public Affairs and Communications of the company, Uzo Odenigbo, who confirmed the death of Jerry in a statement, said the deceased died on the way to the hospital after a seizure while at work.

He convoyed the company’s sympathy to the family and said investigation as to the cause of the incident has commenced.