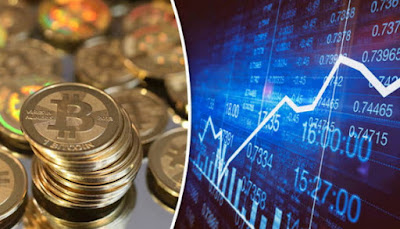 Feb 6, 2018 – The Looming Collapse of Cryptocurrencies

I’m going to be a hypocrite here: whilst predicting the doom of high profitable cryptocurrencies I must confess that I do own some Bitcoin( – not a lot!) and like everybody else I’m speculating that the price will rise and rise and I can sell and make a great profit – greed! Enough said.

For the uninitiated a cryptocurrency is a digital currency designed to work as a medium of exchange for goods and services, just like money, that uses advanced cryptography to secure transactions: because it’s not controlled by a central bank it can be used to transfer and store personal wealth anonymously at a low rate of exchange.

There are currently over 1300 cryptocurrencies available, with more coming on-board, with Bitcoin, Ripples and Ethereum being the most popularly traded. Bitcoin was the first to make an appearance in 2009 and how it came about is still a mystery, some claim it was created by Satoshi Nakamoto while others think it is an AI project gone wrong.Bitcoin started off being worth $0.003 in 2009 with the price hitting more than $20,000 in December 2017. The price continues to soar with some experts predicting it’ll hit $100,000 by 2020, but its price has dipped astronomically in the past few weeks, as much as 40%, from an all-time high of $20,000 in mid-December 2017 to around $9,000 a few hours ago. The sharp drop in price can be attributed to the fact a lot of countries are looking into banning it, Facebook has banned any ads featuring Bitcoin and major credit card companies are banning the use of their cards for cryptocurrency transactions . The major financial institutions don’t trust the virtual currency believing it to be a ‘ponzi’ scheme that will eventually collapse.

In a way it is a ‘ponzi’ scheme : due to the scarcity of it the price has risen astronomically with early investors, who bought low, cashing in as new investors buy at high prices. With no gold to back it up or a central regulating board Bitcoin can crash with investors losing everything.

Even though cryptocurrencies are not legal tender, in the eyes of the law, some top companies such as Expedia, Microsoft, Tesla and Virgin have started to accept them. Whether eventually it’ll make it into mainstream circulation is unknown.

Investors need to be warned that even though Cryptocurrencies will definitely be with us for a long time to come the prices will eventually drop down to more acceptable levels, say around $100, when proper legislation is put in place to control them and the novelty wears off: the price is sky-high now because everybody has jumped on to the bandwagon just like people jumped on to the bandwagon of the dot com boom in the early part of the 21s century only to lose all their money.

Investors need to understand fully what they’re investing in instead of just putting huge sums of money in with the hope of making a killing: an investment in cryptocurrencies, despite whatever the experts say, should be regarded as a speculative investment.

One thought on “The Looming Collapse of Cryptocurrencies”