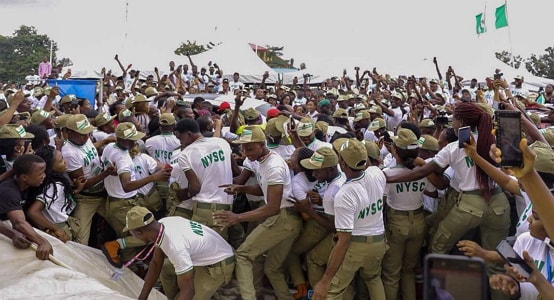 By Kofoworola Bello Osagie, The Nation

Security operatives and the officials of the NYSC had a Herculean time controlling corps members when popular musician, David Adeleke entered the Orientation camp in Iyana Ipaja on Thursday after the opening ceremony of the three week orientation programme for 2,152 2018 Batch B Stream II corps members.

The graduate of music from Babcock University was greeted by a crowd of cheering corps members who almost mobbed him as he came out of a white Mercedes Benz with a Police Force plate number PF 413-S.

The NYSC’s Coordinator, Prince Mohammed Momoh’s best effort to avoid commotion as a result of the star’s presence proved abortive as corps members surrounded his office screaming with excitement after soldiers and officials managed to get him in.

Davido dressed in the NYSC ceremonial uniform was accompanied by a woman, who sat with him as he signed the NYSC oath for corps members.

Afterwards he was brought out to the corps members who had eventually been made to sit on the parade ground.

He refused to stand on a makeshift stage brought for him but preferred to stand in front of his peers instead.

He told them to stay motivated in serving their country.

“Stay motivated; I love you all,” he said before he was whisked away.

Corps members and even others who sell in the Mammy Market ran around as his car left the camp. In his characteristic way, he threw a wad of cash in the air which made some stop the pursuit to scramble for the money. But others still went on until the car left the premises.

The Lagos State NYSC Coordinator, Prince Mohammed Momoh said when Davido came for registration when the camp opened on Tuesday, there was quite some commotion – with the officials struggling to stop outsiders from scaling the fence into the camp.

Momoh said Davido came to camp dressed in white T-shirt and shorts – the uniform used by corps members for Physical Training in the mornings.
When asked why Davido was not in camp for the swearing in on Thursday Momoh said he was issued an exeat to leave camp the day before and had come in early and left.
“I knew what happened when he came for registration. Within minutes, it was an uproar. From the camp market, everybody came around. People heard in town, they were struggling to come in. We had to send soldiers to the gate to stop people from coming in. And we know that that can be a breach of security. Whether we like it or not he is a special corps member by his status and while not giving undue favouritism.

However, after the ceremony, The Nation learnt that the initial arrangement was for Davido to come in early, be on the parade ground just before the swearing in by the Chief Judge of Lagos, and be smuggled out shortly afterwards. However, the star came late thereby nullifying that arrangement.