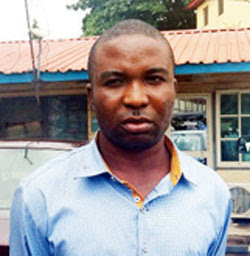 The father of two arrested for allegedly luring beautiful women through social media to rob and rape them has said he took to the act to raise money for his daughter’s treatment.

The suspect, Oluwole Falushe, was arrested by operatives of the FESTAC Police Division on Monday while attempting to rob, rape another victim.

Falushe, who opened a Facebook account, using a fake name, Nifemi Ajanaku, has allegedly lured his victims to hotels in Lagos only to drug, rape and steal their valuables.

He was exposed by a victim, who met him through her cousin.

Although the suspect denied raping the women, he said he lured them to the hotel so that he can steal their valuables, sell them and send the money to Ilesha where his daughter was being treated.

“I do not rape them. I don’t also drug them. We usually have sex but I steal their things and run. I was desperate in need of money to send to my wife so that one of my daughters who is sick can be treated.

“It is not true that I drugged anybody. I invited Mercy’s sister to Oprah Hotel in FESTAC because Mercy, who was my friend on Facebook said she was out of town. We have been friends for over a year. And so, when I told her I wanted a lady to have good time with, she told me she went for a burial in Edo State but she sent her cousin’s number.

“So, I called her and she agreed to come on the condition that I will pay her N30,000 after everything. I stay in Egbeda but I took her to FESTAC. When she came, we had fun and then I stole her two phones and wristwatch. I sold one of the phones N20,000 and sent the money to my wife in Osun State for my daughter’s treatment.

“I also collected her Automated Teller Machine (ATM) card and asked her to give me her pin that I was a banker and wanted to transfer money to her, which she did. But I did not collect any money from her account because she only had N1, 500 in the account,” he claimed.

The victim’s cousin, Mercy Nwang, 21, said the suspect invited her for his birthday party but since she was not around, she asked her cousin to go.

“I have known him for over a year on Facebook but I have never honoured his invitation. He claimed to be a bank manager at Festac. That day he said it was his birthday and since I was not around, I told him my cousin will attend.

“But I was surprised after my cousin came back and narrated that she was drugged and raped by him and that he stole her phones and ATM card. He only left her with N50, which could not even take her back to Iyana-Ipaja where she came from to attend the supposed party.

“I then searched on Facebook but discovered that he has blocked me. My cousin signed in with her account and we saw that we have mutual friends, one of them is my good friend, Vivian, who agreed to help us after I told her what happened. She started chatting with him and he planned to do the same thing to her. He invited her but she now alerted the police and he was arrested at the Zenith Bank where he claimed he was working.”

The victim (name withheld), who said she woke up to discover that she has been raped, stated that she became unconscious after he offered her a non-alcoholic beverage.

She said he begged for forgiveness that same night and told her that they should go to the restaurant to eat, only for him to leave her there in the guise of going upstairs to speak with his manager.

“I was still at the restaurant waiting when the receptionist brought my food. But I told her to take it to the room that I want to eat there. She refused that she won’t go to the room unless I followed her. Since I had the key to Room 103 with me, I followed her only to see the room open and my phones and everything gone. He took everything and withdrew the N172, 000 I had in my account,” she claimed.