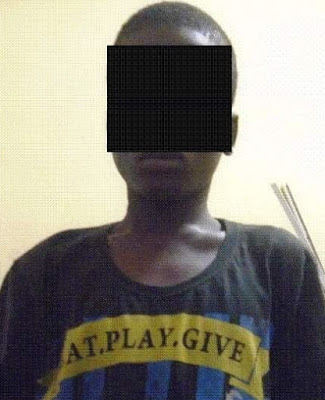 April 11, 2016 – Confession Of Awawa Cult Member: How My Brother Initiated Me Into Cultism In Agege Lagos

“It was on a Sunday evening at Abattoir, Agege. Ola took me to a dark room and ordered me to kneel down. In that room, I met other six members of the group already waiting for my arrival.

The cult leader, ‘Ijaomode,’ blindfolded me with a black piece of cloth and all the six members descended on me. They gave me a thorough beating. “After that, they gave me alligator pepper to chew and alcoholic drink. One of them stood up, drew a tattoo on my forehead and below my eyes as a sign of being a bona fide member of the group.

Since then, I have been going out with them for operations. I stopped going back home and started sleeping in a shanty at Abattoir.”

Johnson was arrested after he and other members of the gang attacked and robbed passers-by of bags, phones and other valuables.