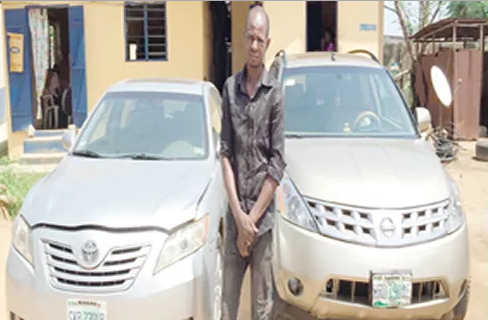 A serial car thief who snatched two vehicles at gunpoint in Diobu area of Port Harcourt recently has been arrested.

The suspect identified as 35-year-old Chidebere Ngangbu snatched the vehicles above (Murano & Camry) at gunpoint on Friday.

He was arrested the same day around 1:30pm on Ejike Road in Port Harcourt.

In his confessional statement, the suspect told the police that he ventured into car snatching business to make ends meet.

Confession Of Awawa Cult Member: How My Brother Initiated Me Into Cultism In Agege Lagos
Photos: Nigerian Based In Dubai UAE Arrested In Lagos With Cocaine Capsules Inside Boxer & Socks