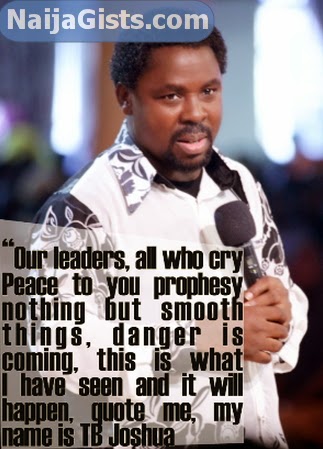 Controversial Prophet TB Joshua in a recent FB post said he prophesied the disaster that befell his church recently during a sermon and only those in the spirit will catch it.

He also warned those exposing his secrets to be careful of dangers that will befall them soon. **empty threats**

Read what he said on his official FB page:

“For the three weeks before the incident, if you heard my message and sat down, you would know I was giving you a vision and prophetic word on how to handle the situation at hand. Trials and tests are for our belief. I go by the directives of God,”
“I have been on this journey for 27 years. Do you think God can close His eyes and rubbish everything here? They are asking God to bring more evidence of whether He is the one who called me. Warn everyone to be very careful. This issue at hand is a delicate issue.

“People are using this to gain money and friends. This is a warning. Whatever people want to write let them write; they will be the ones to read it. I said our God would get back to them. He has started somewhere. He is coming. If your brother is involved, unless he can resurrect the people who died, he will join them. If you can resurrect the people who died, you can go free.

“The servants, the people who sent them; the people who heard the stories all around and those who want to use it for themselves and to disturb my spirit, you may likely join them. Be careful. To be forewarned is to be forearmed. Let us be very careful with our tongues,”.

Keep in mind that TB Joshua and his agents do read contents on NaijaGists.com, I have received a number of mails from those claiming to be the servants of the self-professed prophet.

Our God is not an author of confusion, if he shows you something as disastrous like the one that killed over 115 members of your church recently, he will give you a clear direction on how to prevent.

[Read 1 Corinthians 14: 33 – For God is not the author of confusion, but of peace, as in all churches of the saints]

[1 Corinthians 10:13: There hath no temptation taken you but such as is common to man: but God is faithful, who will not suffer you to be tempted above that ye are able; but will with the temptation also make a way to escape, that ye may be able to bear it]

No matter how long lies prevail, one day the truth of the word of God shall come open.

You shall know the truth and the truth shall set your free. [John 8:32]

To all those under your control and manipulations, one day the light of the gospel of our Lord Jesus Christ will shine upon them and they will make amend.

I will not blame anyone still worshiping this controversial master, one day God will show them the truth.

My family and I know  Fatai Temitope Joshua too well to fall for his lies.

His birth name is Fatai Balogun a Muslim by birth, there is no critical evidence on when he gave his life to Christ. But when he started his Synagogue temple, he adopted the name Temitope Joshua. I will not go into further details. Do your research and allow God to minister to you.

Fatai Balogun’s fans, blast me all you can, THE TRUTH WILL SOON PREVAIL

My greatest prayer for you all is for God to open your spiritual eye to see the kind of bondage you are in.

I thank God for those that God has already delivered from his shackles.

[Mathews 24:24 – For there shall arise false Christs, and false prophets, and shall show great signs and wonders; so as to lead astray, if possible, even the elect.]