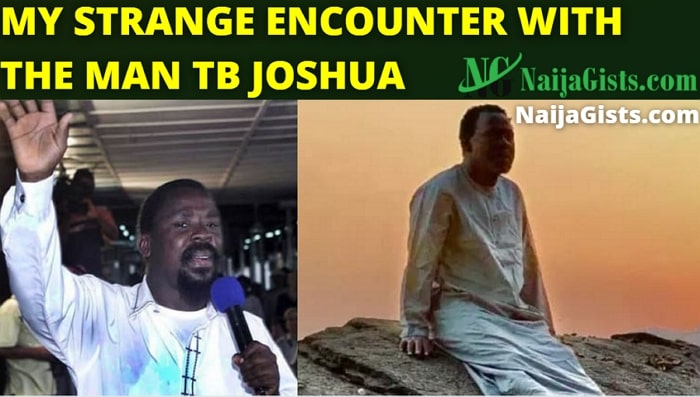 Whatever you are going to read in this piece happened. I am putting this up in a very simple narrative that people will understand. I am not publishing this to condemn anybody or to praise anybody.

Every child of God owes it a duty to narrate his experiences to encourage others on this pilgrimage called life.

I will keep the names of some of my senior editors and colleagues secret as I have no permission to use their names here. But many of them are my friends on Facebook and may be reading this piece.

In 2001, I did a story on a lady who was taken to The Synagogue Church of all Nations (SCOAN) for healing. She did not survive after that. Her mother was furious and said she suspected foul play. That story was published in Saturday Champion.

As was normal with me then, I loved to travel all over Nigeria to investigate feature stories. Earlier I had submitted a proposal to travel to do a feature story on the devastation of erosion in the five South East States. I embarked on the journey the week the story was published. We had a tradition in Champion newspapers then, whenever you traveled, you were expected to report at the state office of the state you traveled to. This was to ensure transparency and for contact and logistics support.

I traveled on a Saturday and on Sunday evening, I reported at the state office at Rotimi Street, Owerri. I was barely 30 minutes in the office when the phone rang. There was no GSM then. The Correspondent picked the phone and I overheard my Editor asking if he had seen me in Owerri. The Correspondent said I was there with him. The Editor demanded to speak with me. He asked me a few questions and added that I should produce a good story. I thanked him. He hung up.

But I became curious. He asked me when I left Lagos, when I arrived in Owerri, the hotel where I was staying, etc. Some of the questions were already answered in the application to travel I submitted to him which was approved and money advanced to me.

Unknown to me, the story of the Lady at the Synagogue had caused an earthquake. They didn’t know that the story was released to the media by one of the Prophet’s trusted aides.

I was to learn later that T.B. Joshua had contacted the publisher and had complained that the story was false. The Publisher demanded my immediate sack.

The Managing Director/Editor-in-chief then said it would be wrong to sack me as the story was balanced and that I made efforts to speak to the Prophet’s media aides.

However, the Editor was asked to carry a rebuttal or apologize. He rejected both options blatantly and rather chose to to be sacked. Why did he take such an extreme position?

He said in the midst of the crisis, a delegation of the media team of SCOAN had met with him in the office and had presented a recorded interview with me where I denied authorship of the story and that the story was given to me and paid for by the Redeemed Christian Church of God.

Immediately, he concluded that there were some hidden dimensions to the matter. They were not telling the truth. How they cloned my voice, I never knew as I did not have the opportunity to listen to the audio.

I was never privy to any discussions on the matter. Somehow, I was not sacked, the Editor retained his job. But a high-powered delegation was raised to go and make peace with T.B. Joshua.

The team included the Managing Director/Editor-in-chief, some Executive Directors of Champion Newspapers and some friends of the prophet, notably, late Edith Ike-Okongwu and late Chief Alex Akinyele, a former Minister of Information.

There was also a serving senior military officer, a Major General, whose name I cannot correctly recollect now. A truce was reached.

But this opened a troika of revelations. Not many knew that T.B.Joshua had many senior journalists in Champion House he was reaching out to and who represented his interests. He was enraged that they could not stop the story. He immediately dispensed with their services.

The Prophet invited me to come and see him several times, I rejected it based on advice. He was to pass a message through one of the aides that I and the Saturday Editor would see his ‘bad side’.

Some weeks later, I slept one day and I heard God speak to me loud and clear: “I have cancelled all the evil plans of T.B. Joshua against you.” I woke up afraid and shivering.

A few years later, I was to become Acting Editor Saturday Champion, Deputy Editor Daily Champion and Editor, Daily Champion. Before then, I had made a decision that I was not going to do another story on SCOAN and its members.

T. B. Joshua began sending goodwill messages to me including gifts. I never objected to them on the belief that God had already delivered me from whatever evil he planned against me. Then he invited me to his office. I began visiting him often and we began phone exchanges.

He had a very large heart. You will never visit him and go home empty-handed. He loved humanity. Each time I visited him, he would take me to his inner chambers and we would discuss as friends.

But there was something strange and unusual about him that gave me great concern. One, he normally called me on the phone between 1am and 2am. There were two people that normally called me at that hour, T. B. Joshua and my friend, Ogbeni Lanre Banjo.

If my phone was not within reach, there was a way I knew who was calling me. If the call was from T. B. Joshua, the curtains in my house will first shake as if under the influence of a wind for some seconds before the phone will ring out. I told my wife and a few friends and colleagues about this.

The second strange thing I noticed about him was that no matter the distance he was standing, if I am at his back he would notice my presence, even if I am in a crowd he would walk straight to where I was. He could see you coming to him even if you are kilometres away.

I also noticed that his movements were jerky and unpredictable. If he was walking with you he may gallop or run or alter his direction as if being pushed. He would be talking to you and suddenly he would keep silent as if listening to a voice.

On October 28, 2009, he invited me to SCOAN. He was donating some transformers to neighbouring communities. I took one of our Senior Reporters, Ufomba Uzuegbu, with me to cover the event. I had already told him about my concerns with these strange observations.

We were late to the event. T. B. Joshua was already addressing the crowd in the church. There could have been over 500 people there. We decided to enter from the front entrance where his back was. Immediately we entered, he stopped his speech. He turned and said, “my friend is here, my friend is here.”

He came down from the rostrum, held me by the hand and took me straight to his office. After the event, my colleague who observed everything said I should not bring him to SCOAN again because there was something abnormal about him.

I used to watch wrestling a lot. Whenever I come back home late after production, I could stay up till 4am watching wrestling and movies. Not any longer. On this day, I was in the parlour watching wrestling with my wife. The curtains started shaking vigorously, I looked at the clock, it was 2am. I said to my wife, “it’s T.B. Joshua, it’s T.B. Joshua.” Immediately my phone rang out. “Hello Prophet,” I said. ” How are you, friend…,” he said.

My wife stood up and went to the bedroom. When I finished the call, she came out and knelt down: “Please I beg of you let today be your last day you will see this man or pick his call. You either choose him, or choose me and my children. This man is not normal.”

Of course I chose my family. I never called him again, never picked his calls and never visited him.

One of his top media aides – he was running a successful PR firm in London before he met T.B. Joshua, who asked him to relocate to Nigeria and head his media unit – sought an audience with me. I went to Toyin Street, Ikeja where he opened up to me, how he had to run for his dear life.

About the author: John Nwakanma is a former Editor of Champion newspaper.