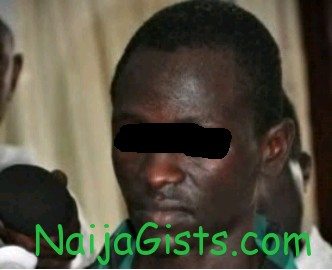 A court in Lagos today sentenced a welder, Akeem Lawal to death by hanging for attempted murder and armed robbery.

Justice Oluwatoyin Ipaye of Lagos High Court in Igbosere convicted Lawal of strangling, shooting and matcheting his stepmother and step sister before he and his gang carted away their laptop, phones and jewellery.

The incident occurred in 2013.

Delivering judgment after over two years of trial, Justice Ipaye noted that the prosecution proved “beyond reasonable doubt, that there was robbery, armed robbery and that the defendant was one of the armed robbers, that attacked the victims.”

“I have no reason to doubt the testimonies of the victims as they were eye witnesses and also had a close opportunity to see the robbers.

“I am therefore satisfied that the prosecution has been able to prove its case beyond reasonable doubt.

“I find you guilty as charged on count one of conspiracy to robbery and guilty on count two of armed robbery as charged in the amended charge”.

Before handing down the sentence, the court asked the convict’s counsel, E.B Obogwu, if she had an allocutus on his behalf.

“My Lord, I urge this court to tamper justice with mercy. The defendant has a son who is dependent on him and if given another chance, he will not toe that line again.”

But, discountenancing her plea, the court observed that Lawal had shown no remorse for his actions.

“The convict shall be hung by the neck until he dies. May the Lord God have mercy on your soul,” Justice Ipaye held.

Lawal was arraigned by the Lagos State Government on May 3, 2016, on an amended two-count charge of conspiracy to commit robbery and armed robbery, contrary to sections 297 and 295 (2)(a) of the Criminal Law of Lagos State, 2011.

The prosecution team led by Mr Akin George said the incident occurred at about 2am on November 30, 2013, at 12, Lawal Street, Akowonjo, in Egbeda area of Lagos State.

George said Lawal and two other masked men broke down the front door of the home of his step sister, Sherifat Niniola Olanipekun, with an axe.

They then attacked her aged 90-year-old mother, Taibat Lawal, and left both of them to die.

Olanipekun, the first prosecution witness, confirmed that Lawal was her step brother and his mother left him when he was three years old.

She said she and her mother took care of him, sent him to regular school and Arabic schools and also sponsored him to learn aluminum fabrication.

Olanipekun said: “On the day of the incident, I was working on some decorations for my church when I heard a loud sound. I woke up my son Abiodun Olanipekun before going to block the door to prevent the armed robbers from entering the house, but they broke down the door with an axe.

“I was shouting for help but no one came to our rescue.

“Immediately the three masked men entered the house, they demanded for N8million, which we supposedly received from a sold property, but I told them that there was no such money with me.

“One of the armed robbers was infuriated and removed the mask from his face. That was how we were able to recognize him.

“Akeem ordered me to lay face down on the floor. He matcheted me with the axe on my head and shot me on my back. Then he went into the room and matcheted my aged mother, strangled her to the extent that her tongue was sticking out, until we passed out and he left us to die.”

The witness testified that before he shot her, Lawal asked for her son who had gone into hiding in the store and was watching from there, but she refused to tell him.

She told the court that they stole her laptop, phones and jewelleries.

He said his mother and grandmother passed out and they were rushed to the hospital after the attackers left.

“The doctors said my mother had 50 bullets in her body and 38 pellets were removed,” he added.

He explained that prior to the incident his mother and grandmother never had any issues with Lawal.

The court heard that the convict may have carried out the attack because he was dissatisfied with his portion of inheritance left for him by his father.

The witness told the court that Lawal informed him that he was given six single rooms, half a plot of land and two shops, while is step sister got 12 shops and a plot of land from their late father’s properties.