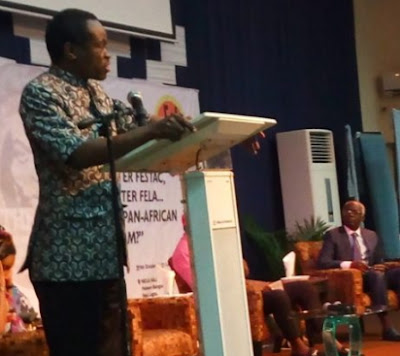 A Kenya Professor of Law, Patrick Lumumba on Monday decried rising wave of corruption in Nigeria, saying that the malaise has produced thousands of elite thieves in the biggest black nation on planet.

Lumumba was the keynote speaker at the 9th edition of ‘Fela, the Debates,’ with the theme: “40 years after FESTAC. 20 years after Fela…Wither the Pan-African Dream?” The event was held at the NECA House, Ikeja, Lagos, Southwest Nigeria, in commemoration of the 20th anniversary of the demise of Afro-beat maestro, Fela Anikulapo Kuti. It was one of the activities lined up for this year’s Felabration Festival.

Felabration is an annual festival of music and arts commemorating the life and times of Nigeria’s foremost musical icon, the late Fela Anikulapo Kuti.

Speaking at the event, Lumumba lamented that corruption has been the bane of the African continent, saying that it was roughly estimated that through the activities of corrupt individuals who were in position of authority, the continent was losing huge sums of money.

He likened Nigeria to the case of the popular book, “Alibaba and the 40 thieves,” saying that the case of Nigeria has gone beyond 40 thieves but thousands of thieves.

“Today in Nigeria and the 36 states of Nigeria, you read the story of Alibaba and the 40 thieves, you will discover that they are no longer 40 thieves, but thousands of thieves. Until the day we liberate ourselves from the clung of these thieves, Africa is going nowhere.

“We are in a continent where the occupation of public office is a gargantuan of acquiring wealth. We have to ensure that the continent of Africa is free from corruption and it must come,” he stated.

Lumumba added that when former chairman of the Economic and Financial Crimes Commission, EFCC, Nuhu Ribadu was fighting corruption, he was forced out of the system, saying that when the same Ribadu vied for the presidency despite his pedigree, he was rejected.

According to him, the current president, Muhammadu Buhari came out with the mantra to fight corruption and was elected, lamenting that when he started fighting corruption, some people were now saying “oh let corruption come back. What do you want your president to do? “

The professor said if corruption must be won, it must not only be at the top, but that all, including civil servants, companies and others must say no to corruption.

“Civil servants, don’t be corrupt, Petroleum minister, don’t be corrupt. There is no justification for corruption. Corruption undermines education, values, infrastructure; corruption destroys our being, it is the reason why Africa countries can never be allowed to sit at the UN Security council, Corruption must be dealt with. Fela saw it many years ago, Fela was a human being and not a Jewish prophet,” he said.

Lumumba stated that when Fela introduced the Afro Beat music, he never meant it to be for entertainment and for dance alone, but that he wanted the nation to ‘dance’ to the Afro Beat of good education, infrastructure, good health system, among others, which he said were lacking in the system due to corruption.

Continue Reading
You may also like...
Related Topics:kenya, law, professor