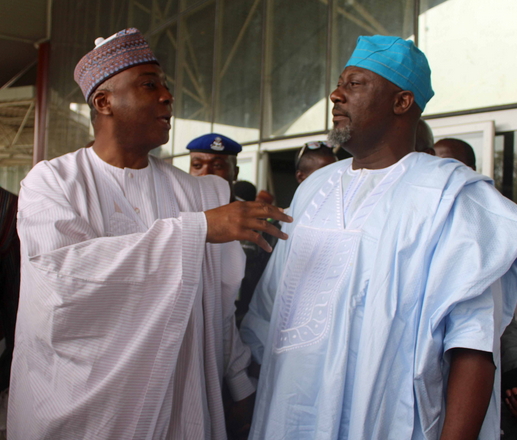 There was drama in the senate as Nigerian Senators passed a vote of confidence on embattled Senate President, Bukola Saraki, at the resumption of plenary on Tuesday.

Saraki got the vote of senators after a motion was moved by Senator David Umaru and was seconded by Senator Ahmed Sani.

Saraki also got the backing of 84 lawmakers.

Umaru and Sani said they decided to show their support for Saraki because they do not want any external influence on the 8th assembly.

But what seemed like a fairy tale with an happy ending then took another turn when Senator Babajide Omoworare (APC-Osun East) who had initially endorsed Saraki asked that his name be struck out, claiming that he was not properly briefed on the purpose of the motion.

While Omoworare startled his colleagues, it was the action of Senator Kabir Marafa (Zamfara Central), who raised a point of order on the motion while plenary was ongoing on that brought about a short rowdy session on the floor of the senate.

Marafa later walked out of the session in peaceful protest.

To quell the tension in the senate, Ike Ekweremadu, the senate deputy president, apologised on behalf of Marafa, noting that such action would not repeat itself.

Saraki was docked last week at the Code of Conduct Tribunal for allegedly falsifying his assets as governor of Kwara state.