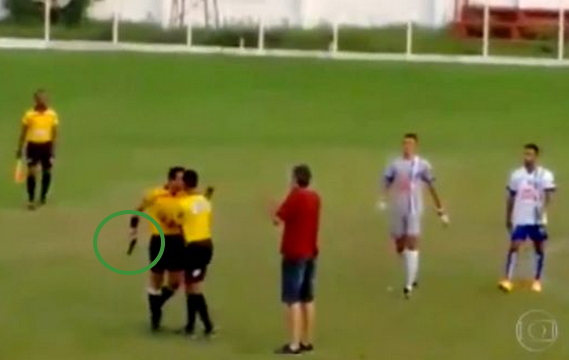 September 29, 2015 – Picture: Drama As Referee Pulls Out Gun During Football Match In Brazil

A drama was caught on live camera during a professional football match in Brazil over the weekend.

While responding to a playing getting out of control, a referee simply identified as Mr Murta who worked as a police officer during the day walked towards the offending player with a handgun in a bid to force him to behave.

The shocking incident happened at the weekend during a regional league match in Brumadinho near Belo Horizonte, Brazil’s sixth largest city and the capital of the state of Minais Gerais.

Murta was reportedly kicked and slapped before he pulled out his gun.

He has been sent for a psychological assessment and could fan life ban.