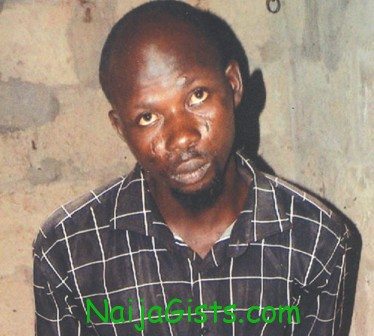 A middle-age man identified as Morufu Fayomi, a resident of Agoro, Ijoko, a suburb of Sango Ota, Ogun State, southwest Nigeria has been arrested for beating his 12-year-old son to death. naijagists.com

We learnt that the deceased, Lekan Fayomi, whose mother is no longer with his father, was hungry as his father did not provide food for him before leaving home and had to take his father’s N100 to buy food.

His father was said to have enquired about the money when he returned home and the boy admitted that he took it to buy some food.

The man, who was said to have become furious, started beating the boy and in the process, hit him on the head with the iron in his belt. The boy was said to have slumped and died immediately.

His body was discovered in the morning when the suspect informed his neighbours of his son’s death but dis not say what led to his death.

The suspicious neighbours rushed to his house to find the boy’s body with blood all over it. The boy’s skull, during examination, was found to have been fractured. The suspect was subsequently arrested and handed over to the police.

The village head, Chief Alabi Oluyemi Ogunjobi Agoro, told reporters that the suspect is known in the place as quarrelsome and he does not cooperate with the people in any community projects and activities.

The chairman of the Community Development Association, Chief Michael Olaniyan, corroborated the baale’s views, adding that some days before the incident, the suspect who is a commercoal motorcycle operator had tied up the boy after beating him and locked him up in the room for a whole day.

Poverty is more than an incurable disease. Imagine a father killing his own son over a common 100 Naira.