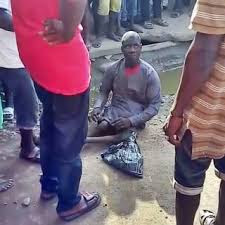 The officials of Lagos Police Command have arrested a disabled beggar operating in Egbeda area of Lagos.

The suspect, Godwin Fawehinmi was caught in possession of a gun and upon investigation, police recovered more guns from his private flat at Alhaji Sadiku street in Akowonjo area of Egbeda.

Fawehinmi who is yet to tell police what he was doing with the weapons has been transferred to Special Anti-Robbery Squad (SARS) office for further investigation.