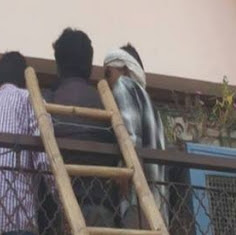 October 22, 2017 – Cruel Father Who Locked Children In A Room For A Year After Their Mother Died Of Cancer Arrested In Minna Niger State

Aminu Abdulazeez, a 50-year-old father has been arrested for locking up his two children in a room for a year and depriving them of proper food and sunlight.

His neighbours in Maitumbi, a suburb of Minna, said the children, a boy and girl, aged nine and eight, were never seen outside of the house since their mother died of cancer over a year ago.

The children were rescued by the Child’s Right Agency after neighbours alerted officials.

The rescued children looked malnourished with multiple marks on their backs, indicating they suffered daily beatings from their father.

Abdulazeez, a civil servant, was away at work when the agency officials stormed the residence with policemen.

He was arrested and detained on his arrival.

It was gathered that the children were taken to the General Hospital and diagnosed to be acutely malnourished and depressed.

They are also said to be undergoing therapy to recover from trauma.

She said neighbours alerted the agency to the development.

“Whenever he is going outside, he locks the children in the room. He denied them sunlight, food and education,” she said.

“The neighbours who are aware of the conditions of the children felt they had to inform the authorities otherwise the children will die.”

When rescued, she confirmed “they looked like children with kwashiorkor.”

Kolo said they are receiving treatment at the hospital after which they would be taken to an orphanage for recovery.

On the father, she said: “We need to know if he is mentally affected or if he did it deliberately.

“The outcome of his medical examination would determine how we would proceed with the case.”

The Director General commended neighbours for being concerned about the children and contacting the agency.