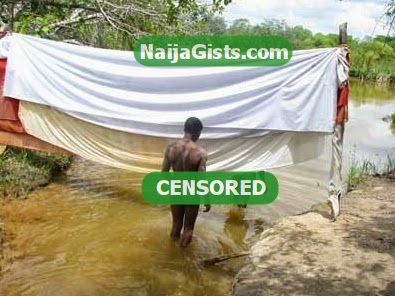 Lagos Police Officials have arrested a run-away Pastor in charge of a Cherubim and Seraphim Church, Ori Oke Ibukun in Ilasan area of Ajah Lagos 4 days after he disappeared.

The pastor identified as Samuel Olusoji was nabbed in connection with the drowning deaths of 2 of his church members during a spiritual cleansing service.

Two brothers reportedly died during a spiritual bath service at a river in Ogombo Ajah.

It was reported that after the deaths, Olusoji allegedly fled the church to evade arrest, while most church members also withdrew. However, the police had arrested the assistant pastor, who was also the church secretary.

Samuel Olusoji popularly called ‘Oluso’ (The shepherd) by his church members was arrested around 9:15 am yesterday after 4 days on the run.