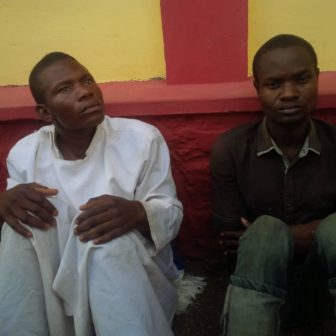 The Ogun State Police Command has arrested a prophet of the Cherubim and Seraphim Church and his accomplice for allegedly killing a woman for money-making rituals.

The prophet, Darasimi Rotimi and his accomplice, Ibikunle Sunday were paraded on Tuesday before newsmen at the state police headquarters Eleweran, Abeokuta, by the state commissioner of police Iliyasu Ahmed.

The suspects allegedly killed one Sara Olowokere at Ijoko, Sango and removed her body parts including head, wrist, heart, breast and private part for money-making rituals.

Ahmed told newsmen that the suspects killed her and “dissected her body before burying her remains at Alafia street, off Alagbole, Ijoko.

The second suspect, Sunday, a 40-year old Okada rider, confessed to our reporter that he killed the victim by hitting a plank of wood on her head.

“I hit a plank of wood on her head. When she died, we now shared her parts. I took her head to Ogo-eri and Darasimi (referring to the Prophet) took the other parts of the body away. They said the parts are essential ingredients for money-making rituals,” he confessed.

He added that the deceased was the girlfriend of the third suspect who is still on the run.

But the prophet from Cherubim and Seraphim Church, Ijoko, denied involvement in the act.

“Don’t mind him. He is just lying. If you commit an offence and confess your sin, God will definitely forgive you. I regret my action. I hope the government will temper justice with mercy,” Prophet Darasimi pleaded.

“I don’t know anything about the incident. I am ready to die,” he added.