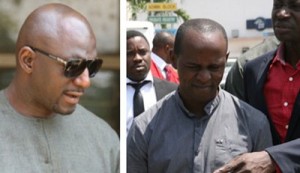 They are wanted in connection with a case of conspiracy, forgery and obtaining the sum of Nine Hundred and Seventy Six Million, Six Hundred and Fifty Three Thousand, One Hundred and Ten Naira, Twenty Eight Kobo (N976, 653,110.28) from the Petroleum Support Fund by false pretence.

The duo have been standing trial before a Lagos state High court but disappeared after being released on bail, forcing the court to issue a warrant for their arrest.

Light complexioned Ogunbambo speaks English and Yoruba, while Theck is fluent in English and Hausa languages.