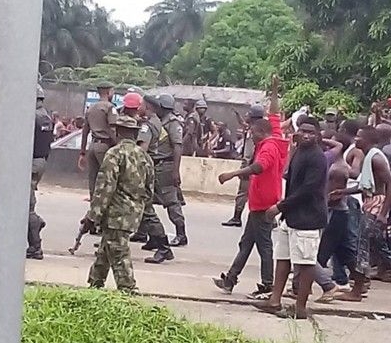 2 soldiers stationed immediately after the Port Harcourt International Airport junction in Omagwa, in Ikwerre Local Government Area of the state were shot dead by some suspected cultists who disguised as bus passengers on Friday night even as the same cultists raided a community in Rivers State killing 23 persons on the spot.

Sources said the gunmen disguised as passengers in a commercial bus, but started shooting at the soldiers, who were inspecting vehicles for incriminating items.

The sources added that two of the soldiers lost their lives instantly, saying that the gunmen were angered by the alleged N100 bribe which the soldiers usually collect from the motorists at two checkpoints mounted at Omagwa and Isiokpo junctions.

We gathered that soldiers were drafted to the area, following cult clashes that have claimed hundreds of lives since late last year, when two cult groups battled for supremacy.