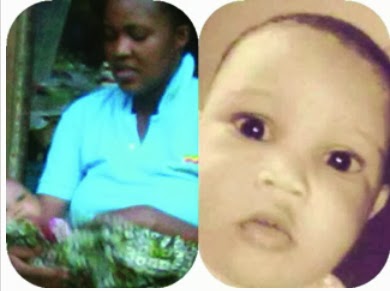 On Monday night in Mushin area of Lagos State Nigeria, some suspected cultists who invaded a street in the area killed a mum and her baby and a bread seller.

At Showunmi st in Isolo area around 9:45pm in the evening, residents ran for safety to avoid being shot after hearing incessant gun shots.

A popular breadseller at Showunmi junction was shot on the head, she fell into a gutter and died on the spot.

Another woman carrying her baby on the back was also shot by the angry cultists.

According to investigation the nursing mother, identified as Mrs Ayoka Muinat Banire, the daughter of a landlord at 20, Showunmi Street, was shot dead with her four month old baby, Aisha.

She had gone to buy moimoin at Ewenla Street that night when the shooting began.

Her baby was shot in the head while still strapped to her back.

An eye witness from the Society for Youth Renaissance and Empowerment, SYRE, in Mushin said it was the woman’s mother who took the dead baby to the Olosan Police Post to report the matter before the police latter arrived the scene after the cultists had fled.

The corpses were deposited at the mortuary by the police as the police patrolled the area that night but could not arrest anybody.

The residents on Showunmi Street are now living in fear as they do not know when the cultists will strike again, while the street is now deserted at night.

Efforts to get the police to comment on the incident proved abortive as several calls to Police Public Relations Officer, PPRO, Ngozi Braide did not go through.

Several people have been killed in the last few years in Mushin and Fadeyi area as cultists and political thugs clash over control of the turf area.

In September, 2013, the Lagos State Police Command arrested a 32-year-old man, Adigun Muda, in connection with some murders in the Mushin and Fadeyi areas of the state.

According to police authorities, the suspect, who is also an alleged leader of Black Axe cult, has been linked to the killings of over 10 youths between 2010 and 2013. The police added that the suspect had, in the past, been declared wanted by the police, charged with murder and was remanded at Ikoyi Prison for over a year.

Last week, the Lagos State Security Council met under the chairmanship of Governor Babatunde Fashola with a warning that all those who engage in gang wars should desist henceforth or face the full wrath of the law.

He said the security agencies would not only go after the boys that are involved in the gang wars but even their sponsors, stressing that this is a warning for them in areas like Mushin, Bariga, Shomolu and all the involved communities.

The threat by the Lagos Police boss seems to have fallen on deaf ears as the gangs keep killing innocent people.