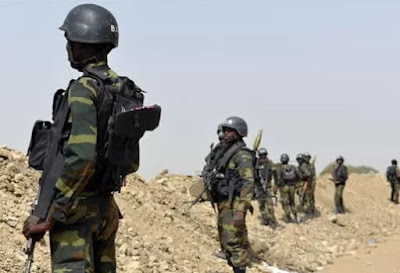 Those living in urban ares of Nigeria are very knowledgeable about political and social events in our country and elsewhere on the globe. We have to thank our ever vibrant press for this situation.

Our numerous radio and television stations together with equally numerous newspapers daily bombard us with all sorts of political and social news, some of which are sordid and depressing especially those from our political front where we read daily about unbelievable political and economic malfeasances.

The latest is the Maina pension scam, the end of which nobody can predict. However, one important foreign news item that has been given scanty attention by our news media is the news from the Republic of Cameroon, our immediate eastern neighbour where there is an ongoing serious political agitation by the people of the former Southern Cameroon. It will be recalled that this part of Cameroon was part of Nigeria until 1961.

On October 1, one Sisiky Ayuk Tabe, who called himself the chairman of Southern Cameroon Governing Council formally declared the independence of Southern Cameroon to be known as Federal Republic of Ambazonia. This followed an earlier declaration in 1984 after Paul Biya, who has been ruling the country in a draconian manner since 1982, unilaterally changed the name of the country from United Republic of Cameroon to Republic of Cameroon.

Cameroon has chequered history. It was a German protectorate in West Africa and administered as a League of Nations mandate after the First World War. After the Second World War, it was administered as UN Trust Territory by France and Britain. The French Cameroon became independent on January 1, 1960 and took the name Republic of Cameroun. The southern one-third of British Cameroons inhabited mainly by Christians joined the Federal Republic of Cameroun on October 1, 1961, while the northern two third of the British Cameroun inhabited mainly by Muslims joined Nigeria on June 1, 1961 and was renamed Sardauna province to honour the late Sir Ahmadu Bello, the Sardauna of Sokoto who campaigned vigorously for the unification of Northern Cameroon with Nigeria. That province is now in Adamawa State.

Before independence, South Cameroon was administered with Nigeria by the colonizing Britain. Initially, it was administered as part of Eastern Nigeria and by 1953, it became autonomous and was administered like the other three regions. Dr. E. M.L. Endeley, a personable medical doctor of Kameroun People Congress became the Leader of Government Business and his party was in alliance with Chief Obafemi Awolowo’s Action Group. The party took part in the pre-independence national government of 1957 when Alhaji Tafawa Balewa became the Prime Minister for the first time. In this government, Victor Mukete from Southern Cameroons was made a federal minister in charge of research.

Things were going on very well and people felt that at independence, Southern Cameroon would be completely integrated with Nigeria. Suddenly in 1958, the political equation changed with the defeat of Dr. Endeley at the regional election by John Ngu Foncha who led the opposition party. On becoming the Leader of Government Business, the feisty Bamenda-born John Foncha had no stomach for Nigeria as he did not hide his hostility towards Nigeria at every opportunity.

He wanted nothing but unification of his part of the country with the French Cameroons to form a new nation at independence. Unlike the situation in the Southern Cameroons under John Foncha, there was no hostility towards Nigeria in the Northern Cameroons which was administered seamlessly with Northern Nigeria under Sir Ahmadu Bello. In fact during this period, the area produced Alhaji Habba Habbib a reputable politician who was the Secretary General of Northern People’s Congress (NPC).

Before long, Foncha found out that he had led his people into a union where his people are no more than serfs. By 1966, tension started to brew in the new Republic. Foncha’s parties and other political parties from Western Cameroon were dissolved to give way to National Cameroon Union (CNU) controlled by President Ahmadu Ahidjo. By 1972, a new constitution replaced the federal constitution with a unitary constitution. The country changed its name from United Republic of Cameroon to Federal Republic of Cameroon. Most decisions about Western Cameroon were taken without consultation and the naive John Foncha who led his people to political quagmire himself was removed with ignominy and replaced with S.T. Muna who was another lackey of Ahidjo. The diminutive John Foncha consequently became irrelevant in the scheme of things in Cameroon. By 1994 he was disgraced out of Biya’s constitutional consultation commission where he described the unification of southern Cameroon with French Cameroon which he championed with abandon in 1961 as an annexation and a grand deception.

John Foncha carried his regret to his grave in 1999 as a broken man who led his people because of his hatred for Nigeria into political and economic oppression, subterfuge, intimidation, cultural emasculation, government sponsored violence, forced occupation and misappropriation of his people’s resources.

There is no doubt that the people of former Southern Cameroon are having more than a raw deal in the Republic of Cameroon where they have been emasculated politically. Unfortunately, nobody is listening to their genuine grievances. The African Union (AU), like its precursor, the Organization of African Unity (OAU) is well known for its impotence when it comes to solution to African problems. Its latest failing is manifested in its ability to put an end to the thriving slave market for black Africans currently going on in Libya. The AU is pretending as if all is well in Cameroon as it did in similar situations in Sudan, Central African Republic and other hot spots in Africa in the past.

The situation in the Cameroon presents a delicate diplomatic problem to Nigeria. Nigeria who fought the Biafra secessionists in the eastern part of the country in the late sixties and at present trying to emasculate the resurgence of such a tendency in the same part of the country cannot be seen to be sympathetic to any secessionist group in the Cameroon no matter how just is the case of such group.

Moreover, Nigeria needs the support of The Republic of Cameroon under the aging dictator, Paul Biya in the fight against Boko Haram in the North-east of our country. One can only hope and pray that one day, the beleaguered people of the former Southern Cameroons will be liberated from the unholy union foisted on them by their myopic leaders who are longer around to witness the misery they have visited on their people.

Continue Reading
You may also like...
Related Topics:cameroon, situation

Where Are The Preachers, The Custodians Of Traditional Values & Political Leaders?
In Defence Of Amasa Firdaus, Nigerian Muslim Law Graduate Banned From Call To Bar Over Hijab