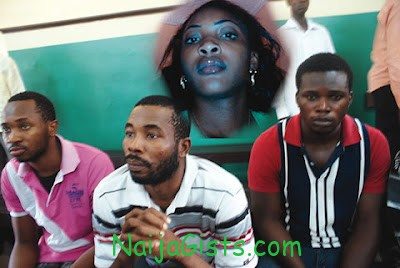 4 suspected killers of Cynthia Osokogu, a Nasarawa born Nigerian lady who was killed by her Facebook friends at an hotel in Festac Lagos, Nigeria are now free men. naijagists.com

In a letter to the court handling their trial, Lagos DPP said the 2 pharmacists, Orji Osita and Maduakor Chukwunonso and 2 other co-defendants, Gideon Okechukwu and Ezeaka Chinonso aren’t culpable of the offences of murder.

Based on the order from the DPP, Justice Adeniyi who presided over their trial has ordered them released from custody.

The office of the DPP however found the main culprits in the murder case, Okwumo Echezona Nwabufo and Ezike Ikechukwu Olisaeloka culpable of the offences of murder, conspiracy to murder and conspiracy to commit felony to wit stealing, while Ezike Nonso Ifechukwu was found culpable of receiving Cynthia’s stolen blackberry phone contrary to sections 326(1) (2) law of Lagos State.

In the advice, DPP noted that to establish offence of conspiracy,”the prosecution must establish that there was agreement between two or more persons to carry out the crimes or unlawful act.”

“In the light of the foregoing, this office shall prosecute Okwumo Echezona, Nwabufoan Ezike and Ikechukwu Olisaeloka for the offences of conspiracy to commit murder, murder conspiracy to commit felony to wit stealing and stealing contrary to Section 231,221, 409 and 285 (1) of the Criminal Law, No. 11, Laws of Lagos State, 2011 respectively.”

No date has been fixed for their arraignment.(PM report)

John Okafor, Mr Ibu’s Life Story: I Worked As An Hair Dresser, Firewood Seller To Feed My Family
Kidnappings On The Rise In Ogun State Nigeria – Serial Kidnappers On Rampage