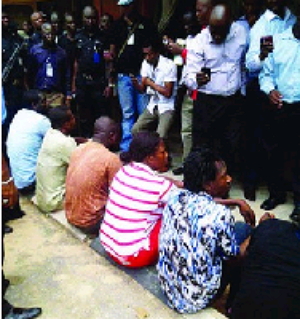 Nov 26, 2012 – Kidnappings On The Rise In Ogun State Nigeria – Serial Kidnappers On Rampage

Immediately after the prayers, at about 6 a.m., when the worshippers were exchanging pleasantries, some armed young men, who witnesses later said had been lurking in the area since 4 a.m., walked into the mosque and told everybody there to lie on the floor, face-down. One of the intruders identified Araba as the person they were looking for and the 56-year-old indigene of Ago-Iwoye was ordered to get up and get into a car parked outside the mosque.

The intruders then collected from the worshippers their mobile phones, got into the vehicle with Araba, and sped away with him. Many initially thought Araba was abducted by some of his associates he might have wronged in a business deal. But this notion was dispelled by his heavily pregnant wife, who swore her husband was a honest building materials merchant: “…Alhaji did not have any deal with anybody; everybody in this town can attest to that. He is an easy going person. Hardly do people believe that he is Aranse because of his humility.”

It was later in the day, when a ransom request of N10 million was made to the family that they realised that Araba was a victim of kidnapping; a growing trend in Ogun State. Six days later, he was back at home, after his family had given the kidnappers N10 million for his release.

Until early this year, kidnapping was something people of Ogun State only read about in the media. But now it is a fate every resident is afraid of. Among those who have fallen victim are traditional rulers, high chiefs, politicians, journalists and other professionals, civil servants, even students. Nobody is exempted. And the security agencies seem helpless to arrest the development.

If Alhaji Araba’s case could be ascribed to expectation of a big pay day by the abductors, one is stumped to understand why primary school pupils are targets. That was what nearly happened on Friday 30 March, when an 18-year-old suspect was apprehended at Nissi Nursery and Primary School, Amolaso, in Abeokuta South Local Government Area of the state.

Narrating what happened that day, Mr. Adeyemi Adeleke, headteacher at the school, said: “We were all inside the school busy collating the pupils’ report cards while some pupils were on the field playing football. One of the residents nearby rushed in to alert us that a boy was with the children on the field and they suspected him [of planning to abduct some of the pupils]. I quickly rushed down there and inquired from him about his mission…Before I knew it, he was flashing a knife and we started fighting. He wounded me but with the help of people in the area, we overpowered him and handed him over to the office of a vigilance group in the area.

“Had it not been for the vigilance of residents of the area, the boy could have made away with some of the pupils playing on the field behind the school compound.”

Though the suspect later claimed to be an apprentice cobbler who had gone to meditate on his travails after an altercation with his father, there have been dozens of kidnapping incidents in Ogun State this year alone. Perhaps the most widely reported was that of Dr. (Mrs.) Olusola Otulana, of the Department of Surgery, College of Health Sciences, Olabisi Onabanjo University Teaching Hospital, OOUTH, Sagamu. She was kidnapped around 6.30 p.m. on 4 May, at Agbowa, near Ikorodu, Lagos State, after a visit to Ikorodu to carry out eye surgery on a patient.

The kidnappers initially demanded N100 million ransom from her husband, Dr. Mikail Otulana, who owns Aje Medical Centre, Ijebu-Ode. But after much pleas by the family, it was reduced to N60 million. Speaking with this magazine a day after the abduction, the husband said the kidnappers laid ambush to his wife at Agbowa and the police at Agbowa phoned to inform him of the abduction. “I spoke with the kidnappers of my wife and they were hell bent on collecting the ransom. After much pleading they reduced the ransom to N60 million. But where will I get such money? I am a medical doctor like my wife. I am not a politician; the children are worried. They have been asking where their mother was taken to since Friday.”

Dr. Otulana’s kidnap so heightened the fear barometer in the state that doctors, under the aegis of Nigerian Medical Association, NMA, Ogun State chapter, along with other health professionals, staged a street protest in Abeokuta, the state capital, demanding her release. Speaking on the incident, the state NMA Chairman, Dr. Adewunmi Alayaki, said it was the fourth case of kidnapping in the area this year alone and called on government to provide security for the people of the state.

Despite the threat to kill Dr. Otulana if N60 million was not paid, her husband’s spirited efforts to raise the money were not successful. Respite finally came the family’s way on 9 May, when the abductors heeded pleas by the medical director and accepted to collect N10 million as ransom.

On how he gave the money to the kidnappers, the medical doctor recounted the games the abductors played with him before the money was collected at gun point. “They called me to bring the money and meet them at the Lagos motor park in Ijebu-Ode. They advised me not to play tricks with them or else they would waste the woman. They ordered me to come alone on a bike. When I got to Lagos motor park with the money, I called their phone number and they inquired about the type of clothes I wore. After describing it to them, they said they were looking at me and directed me to move towards the expressway.

“When I got to the express way, they called again, telling me to move down towards Ikorodu Road through Ala, Idowa, Ibefun and Itoikin. To cut a long story short, I found myself in Ikorodu. They later called and asked me to turn back to Ijebu-Ode, which I did. When I got to Ala, they stopped me. All this was happening without me seeing any of them, but they were monitoring me to know if someone was following me. They asked me to go towards Itoikin and when I got to a place between Imodi Ijasi and Itoikin, they ordered me to park there and someone came out of a nearby bush and pointed a gun at me.

“The boy collected the money and my phone from me and asked me to turn back towards Ijebu-Ode. He said we should go to Idowa junction later in the day to pick my wife. We were in the area from around 8.30 p.m. and when it was about 11p.m., I saw my wife coming out of the bush looking tattered and weak. Without wasting time, we took her and headed for Ijebu-Ode.”

It was gathered that the woman was maltreated by her abductors as she complained of serious aches all over her body. A family member quoted the woman as saying: “The abductors were very wicked. They always beat me and hit my head with gun butt several times. I can’t talk much for now. My experience in the hands of those people is unpalatable. I’m not feeling alright now, I need to take good care of myself. I thank everybody who joined my family members in searching for me, including my colleagues whom I was told staged a peaceful protest in Abeokuta for my freedom. May the good Lord be with you all,” said the woman who was visibly in pains.

Members of the Nigeria Medical Association, NMA, Ogun State chapter staged a street protest in Abeokuta, the Ogun state capital, demanding the release of their colleague. Speaking with journalists that day, the NMA Chairman in the state, Dr. Adewunmi Alayaki, said it was the fourth case of kidnapping in the area this year alone and called on the state government to provide security for the people of the state.

But without security personnel of its own, there is little the state government can do other than to provide support to the police and Security and Civil Defence Corps. This, it has been doing appreciably, the most recent being the procurement of security equipment worth over N20 million to boost the operations of such security organs. In fact, the state governor, Senator Ibikunle Amosun’s effort to curb the rising wave of bank robbery and kidnapping in the state has gained widespread recognition, and won him an award as the best security conscious governor in the western part of Africa. The award was presented to Amosun by a safety and security firm in Accra, Ghana.

Yet, kidnapping continues in Ogun State, and it is posing a big threat to its economic well-being, with owners of big concerns leaving for fear of their safety. One of such businessmen is Segun Ayobolu, who owns Citi Hotels and Suites, located at Imowo along Ago Iwoye-Ibadan road, Ijebu-Ode. Ayobolu was abducted on Monday 24 September, from his office at Erinlu, in Odogbolu Local Government Area of the state.

Ayobolu, who is in his mid 40s, is also the founder of Feed The Elderly Foundation, a non-governmental organisation, was released three days later, after his family parted with N10 million. The kidnappers had earlier demanded N400 million from the family but after much pleading, accepted N10 million.

So deep has the psychological effect of the kidnapping experience been on Ayobolu that, last week, he disclosed his intention to close down his chain of businesses in Ijebuland and quit the town. One of his confidants told the magazine that, “Citi Hotel and Suites and Ayobolu’s personal residence in the town are up for sale already. He has briefed his lawyers to put them in the market and get back to him whenever any offer is available. He has also closed his operational office at Erinlu and has dismissed all the staff at the Feed the Elderly Foundation in Ijebu-Ode. He has even concluded plans to contact OGTV and OGBC in Abeokuta by next week for announcement on his intention to stop the Feed The Elderly Foundation project in Ogun State.

“It is nonsensical to continue to plough your own earnings into helping people that possibly don’t want you to succeed. The Feed the Elderly Foundation project had been exclusively funded in major parts from his hard earned resources.”

When contacted by this magazine, Ayobolu confirmed that he was leaving Ijebu-Ode and that his decision was based on the increasing cases of kidnapping. He said he now understood why many successful indigenes have refused to come back home to develop the state.

Like Ayobolu’s proposed exit from Ijebu-Ode, so also are entrepreneurs fleeing other towns in Ogun State. This has got many indigenes worried. One common thread that runs through the kidnapping cases, said some who spoke to this magazine, is the N10 million ransom the culprits have decided to not to go below. This, they say, makes them believe that indigenes of the state may be involved. One said: “If it is the handiwork of indigenes who think that the businessmen are feeding fat on the toil of Ogun people, then they are very much misguided. Many of the victims may have profit-oriented businesses but they are providing jobs for our sons and daughters. And they are keeping Ogun State on the map of prosperity. The notoriety the abductions is giving us will scare away investors from the state, with potentially disastrous consequences.”

Can the police rise to the task before Ogun State’s reputation ends up in tatters?