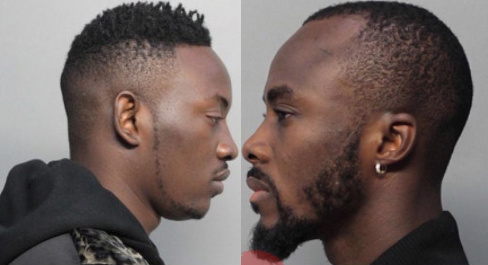 June 4, 2017 – How Dammy Krane & Yahoo Plus Scammer Partner Tried 5 Stolen Credit Cards To Book Private Jet In 1Hour & How They Were Arrested

The US-based private jet firm that reported popular Naija hip hop artist, Dammy Krane to police in Miami on Friday have opened up on what led to his arrest.

The 24-year-old musician fell into TapJets trap yesteray after their booking app raised a red flag on the activities of two scammers.

After investigation, it was revealed that Krane and his partner in crime tried using 5 stolen credit cards to book a private jet within an hour.

Speaking to some news men, TapJet reveals that although they are not proud to have had Krane arrested, it was their duty to protect other companies from the fraud that would likely continue.

Explaining how they had Dammy Krane and his accomplice arrested, the Jet company stated that Dammy Krane had the Jet App on his Samsung Galaxy S7 with which he made the bookings, and he continued to use different cards for the transaction until he used up to five.

According to Tapjet, the details on the card entered was different from the details given and the zip code.

His accomplice also tried to purchase flight on another phone with yet another card. Total of 5 cards in an hour till one worked. We are 100% confident that our app was on that phone and order was placed via T-Mobile network from cell tower located in Miami area.

We have coordinates of cell tower and proof that they took a car from that area to Opalacka airport. That’s where arrest took place. We are not proud about it. We want others to think twice before stealing from companies. .

Technology is very sophisticated and being an airline, we have access to the latest. I hope you can help spreading the message that we are not on a witch hunt.

Meanwhile, a defense attorney, Deborah Prager, has now been appointed to represent Dammy Krane who is now facing a 9-count-charge of fraud and grand theft.