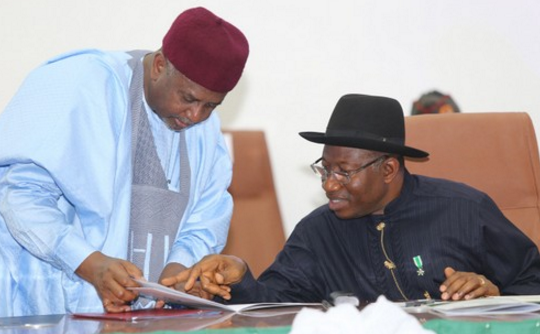 The EFCC has extended its investigation into the arms procurement scandal to the 2015 presidential campaign funds of former President Goodluck Jonathan.

We reliably gathered on Saturday that the latest move was as a result of fresh discoveries that more chieftains of the party got funds from the office of the National Security Adviser, specifically for the Peoples Democratic Party’s presidential campaign.

A former Minister of State for Finance, Ambassador Bashir Yuguda, was reported to have given N600m to six chairmen of the contact and mobilization committee of the PDP in the 2015 elections.

He was reported to have listed George (South-West); Yerima Abdulahi (North-East); Peter Odili (South-South); and Attahiru Bafarawa (North-West) as beneficiaries of the funds. Yuguda, in a statement made to the EFCC, said the money was for the 2015 general elections. Bafarawa, a former Governor of Sokoto State, has since admitted receiving N100m.

But George, a former Deputy National Chairman of the PDP, denied reports that he had collected N100m from Dasuki.

A top official of the EFCC, who confided in one of Punch’s correspondents, however said that despite the denials and ‘half truths’ by some of the suspects, findings by the commission showed that other sums, apart from the initial N600m, were diverted into the campaign fund from the NSA office.

He said, “The commission is looking into the funding of the presidential campaign of the former president. Some of the money that was spent came from the NSA office.