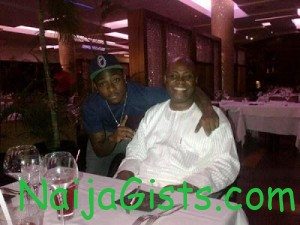 The father of Nigerian pop singer, Davido, Dr Deji Adeleke has separated from his new wife of less than three years. naijagists.com

We learnt the couple who got married 2 years back are in troubled waters in terms of their union.

Though the reason for their separation could not be ascertained, we learnt the former lovers have gone through some tough marital problems.

According to family sources who confirmed their separation, the trouble started when Mrs Adeleke was nowhere to be found in Dr Deji Adeleke’s annual family thanksgiving event.

Dr Deji Adeleke married his new wife after the death of his former wife, Dr Vero Adeleke, the mother of singer Davido.

The former Babcock university lecturer passed away in 2003 after a brief illness.