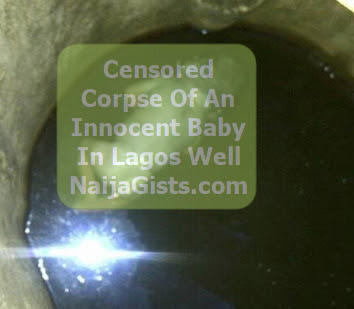 Who could have done this to an innocent child?

Above is the exact question on the mind of everyone who came across the floating corpse of a dead baby on Sunday night in Lagos, Nigeria.

The lifeless body of the child was found by a man who went out to fetch water late last night.

We learnt some suspects who used to live across the street have vacated their apartment since the news broke last night.

Apparently, the baby was dumped inside a well belonging to a childless couple on the street.

The couple has called the police as investigation begins.

How can someone throw away such a priceless gift from God.

Imagine the pain of carrying pregnancy for a whole 9 months.

Why can’t they take the innocent child to an orphanage or a church nearby or rather drop the baby in front of the childless couple’ home.

This world is full of unimaginable wickedness.

May the soul of this innocent baby rest in perfect peace.