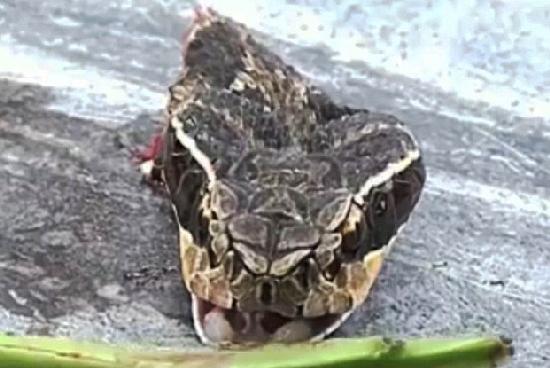 Tragedy struck at Enugu House of Assembly as an unidentified manual labourer bitten by a wounded snake as he worked at the assembly complex died.

The labourer, who was from Abakiliki in Ebonyi State and his colleagues were brought from “Ogbo Mmanu”, a popular hub for manual labourers in Enugu, on Wednesday afternoon to clear the thick grasses that had taken over the House of Assembly complex.

An eyewitness told Daily Sun that as the labourers worked they saw a big snake, which one of them used his knife to cut into two halves, but the head of the snake ran away to bite one of the labourers.
It was also gathered that the Director of Administration of the House, Mr Linus Nebo, who hired the labourers rushed the man to the ESUT Parklane Hospital, where his condition deteriorated.

As the condition of the labourer was not getting better in the hospital, he was relocated to a herbal home at Ugwuaji, a suburb of the Enugu metropolis, where he later died.

The incident threw the entire assembly into mourning with the members of staff now afraid of entering their offices.

All attempts to get the Chairman of House Committee on Information, Paul Nnajiofor, failed as his phone rang repeated without him picking his calls.

It was gathered yesterday that the kinsmen of the deceased have taken his remains to his country home in Abakiliki, Ebonyi State for burial.