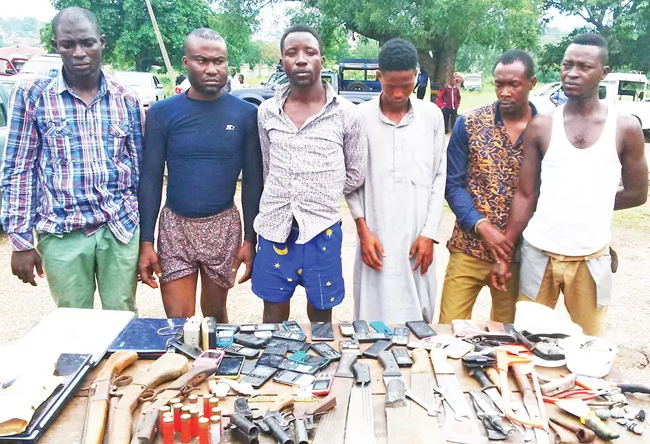 Teslim Mohammed, a 26-year-old suspected armed robber has told the police in Oyo State how he got a gun from a colleague, attempted to use it to rob but was arrested before carrying out the attack.

Mohammed, who hails from Kwara State, was paraded at the state Police Command Headquarters, Eleyele, on Friday along with Aliu Azeez (28), Olanrewaju Ajayi (23), Kehinde Abiodun (28), Adeleke Adeyemo (28), and Adamu Muhammed (23).

But the state Police Commissioner, Leye Oyebade, said the suspects, who had been terrorising residents of Oyo and Ogbomoso in Oyo State as well as Ilorin in Kwara State, were arrested in their hideout on April 26 by men of the Special Anti-Robbery Squad based on intelligence report. Confessing to a series of robbery operations his gang had been engaged in, Mohammed said: “I am a native of Ilorin and I had been robbing in Ilorin before.

But it was up to a year since I robbed last before one boy named Tunde brought a gun to me at Agbabiaka area of Ilorin. Tunde asked me to sell the gun.

I called another friend, AZ, and we attempted to use it to rob, but we were unable to operate that day. “I later gave the gun to my colleagues who went with it. But later, I saw policemen who came to arrest me. AZ and Tosin are my friends and we were doing the robbery operations together before we were caught.

I met AZ not quite long ago. It was the arrest of the boy who brought the gun to me and his accomplices that led to my own arrest.” Mohammed also explained how the gang came about arms and ammunition displayed before them.

He said: “All these arms recovered from us were just recently procured. We have not used them.” Mohammed said he embraced robbery because his mother died and his father was unable to take good care of him.