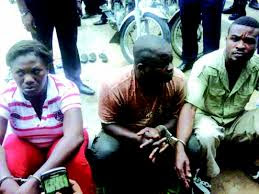 A Delta State High Court sitting at Asaba, the state capital, on Friday sentenced four persons to a total of 67 years imprisonment with hard labour for kidnapping one Mrs. Ighowoh Yavbiere and four children.

Mrs. Yavbieri is the wife of Mr. Raymond Yavbieri, a former Clerk of the Delta State House of Assembly.

The court presided over by the Chief Judge of the state, Justice Marshal Mukoro, in its verdict sentenced the accused persons to 67 years imprisonment for their involvement in the abduction of the lawmaker’s family members.

Three of the accused persons got 20 years each, while the 4th accused who was convicted on only one charge was sentenced to seven years in prison.

They were convicted on charges of conspiracy, kidnapping and demanding property with menace as they received the sum of N7million from Yevbieri before his family regained freedom.