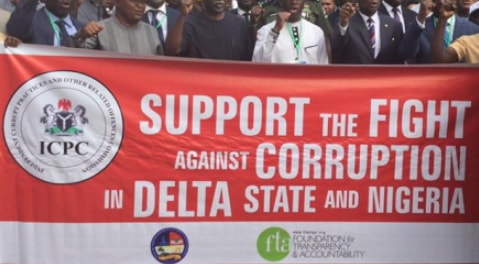 A Delta State High Court sitting in Ozoro, has sentenced a former Education Secretary of Bomadi Local Government Education Authority, Mr. Abayomi Kelekumor, to five years imprisonment for employing his daughter, Miss Preye Tom, into the service of the organisation.

He was sentenced to jail without the option of fine.

The ICPC in the charge preferred against the convict, said he gave employment to his daughter, who was then a Senior Secondary Two student, knowing well that she was not qualified for such.

The young lady was employed as a messenger on Salary Grade Level 02 by her father in July 2003 while she was still a student of Tamigbe Grammar School in Toru-Tamigbe under Burutu Local Government Area of the state.

The judge ruled that the convict would serve his term without any option of fine in accordance with the law.