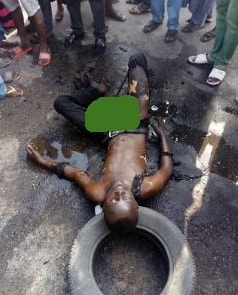 A young man who set himself on fire on Wednesday has died.

The deceased simply identified as Ahmed reportedly poured petrol on himself on a road leading to Omole Estate around 4:30pm and lit himself.

He was rescued by Lagos Emergency Response team around 5pm.

He reportedly gave up the ghost while receiving treatment at the hospital.

Here is what eyewitnesses and residents said about the deceased barber:

“He was a barber and used to have a shop around Akiode. He closed the shop sometime ago and started roaming about the neighbourhood. He smoked a lot which I think affected his brain.

“Two days ago, I met him on the road and talked to him that he needed to change. I told him that I would take him to church next Sunday for special prayers. He asked me to buy roasted corn for him which I did after he assured me he would follow me to the church.”

“Many people around here know him. He used to be a decent person before he suddenly changed as a result of drugs. He lived with his family within this community and they are aware of his plight”.

Continue Reading
You may also like...
Related Topics:alive, barber, burn himself, lagos