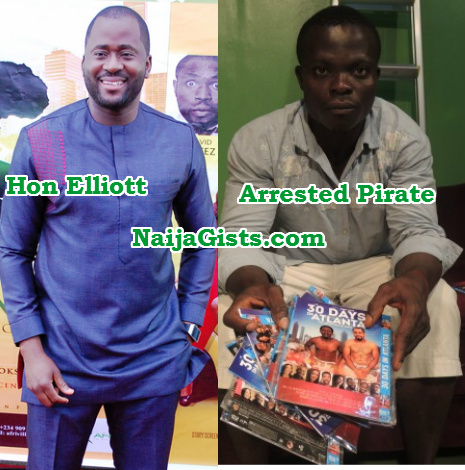 Nollywood actor turned politician, Desmond Elliott took sometime off his busy schedule to hang out with colleagues at the premiere of Tempting Fate in Lagos last week.

On Friday the 10th of July 2015, the actor dressed in a black suit addressed the audience over Nollywood movie producers’ ongoing battle with piracy.

“Say no to piracy,” his voice boomed, “the producer of Tempting Fate movie has spent a fortune and we need to support him to recoup his investment. I was at Ojuelegba today and I saw copies of AY’s 30 Days in Atlanta being sold for N100.”

Hon Desmond Ellliott said he almost forgot that he’s now a government official when he jumped out of his car and almost slapped the hell out of a trader hawking the pirated copies of AY’s movie on the streets of Ojuelegba.

He however ordered the hawkers to pack their illicit wares and your guess is as good as mine, that was exactly what they did!