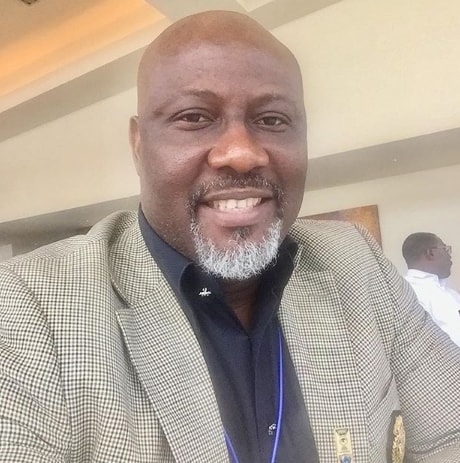 Dino Melaye Flees Nigeria To UK, Alleges Political Enemies In Kogi Planning To Kill Him After His Thugs Land In Police Net

Embattled Senator Dino Melaye who is yet to honour Police invitation on a criminal case involving him and some political thugs in Kogi has fled Nigeria to the United Kingdom over fear that police will soon disgrace him by putting him in handcuffs.

His lawyer have petitioned Police IG Ibrahim Idris, United Nations and other international communities over an alleged murder plot by his political enemies in Kogi state who are working with Kogi state police command.

Part of the petition reads:

“As things stand, I live each day in constant and reasonable fear for my life, looking over my shoulders and being harassed by the named politicians. The police are a willing tool in the hands of these politicians.”

“I am a law-abiding citizen, who voluntarily submitted myself before the FCT High Court to answer to charges, which I know are unsustainable.

“However, the situation I am in right now gives me reason to believe that the law enforcement agencies, particularly the police, are in cohorts with my political enemies and can even go to the extent of terminating my life extra-judicially.

“I, therefore, seek your intervention in the circumstances to ensure that my fundamental human rights, which both Nigeria and your countries are party to, are guaranteed and my life protected.”

“The fact that our client is now the one alleged to be a gun runner by the police in Kogi State is, therefore, extremely suspicious and with all due respect smacks of a set up.

Melaye unofficial trip is unconnected to threat by Police to arrest him for refusing to honour invitation after some political thugs he allegedly hired to deal with his rivals in Kogi state exposed him as their gun runner and sponsor.

So the Ajekun Iya Senator sabi run after all his drama at the senate. Chai!!! .