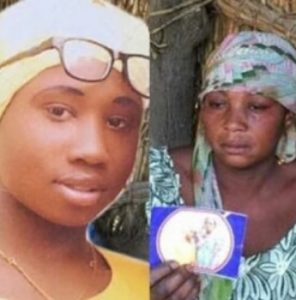 It was a most practical and certainly welcome act of restitution. Rampaging militants, who had seized some students of the Government Girls Science and Technical College (GGSTC) in Dapchi, Yobe State, on February 19, swept back into the town last Wednesday, freeing their hostages following negotiations with the Federal Government.

The militants, suspected to be from a faction of Boko Haram, returned to Dapchi in the same storm raider fashion they struck in February, trucking their hostages back to freedom. Reports said they came in a convoy of about nine vehicles and dropped the schoolgirls off into the custody of harried parents, having beforehand indicated they would rather not release them to security forces. Of the 110 schoolgirls seized from their hostels 30 days earlier, the militants released 104 captives along with two others said not to be of the GGSTC stock.

It seems fairly obvious, sadly, that five of the Dapchi schoolgirls will never be returning, having died in an overcrowded truck en route to captivity on the day they were abducted. “Five of us could not make it, as they were confirmed dead on arrival at the hideout due to suffocation in the vehicle that conveyed their batch,” one of the freed schoolgirls was reported telling the press.

The militants waltzed into Dapchi unchallenged last week because the Muhammadu Buhari administration directed security forces to hold fire as part of the hostage release deal. A security source was reported in the media saying: “Boko Haram militants drove into Dapchi, dropped off the girls in the heart of the town and went back with no shot fired at them. We were asked to leave our camp, which is the route that Boko Haram followed to drop off the girls.”

Information and Culture Minister Lai Mohammed confirmed the ceasefire deal, saying the militants let go the schoolgirls with no precondition attached other than that they would deliver the girls directly to Dapchi. Even though many have voiced doubts that the liberty granted the schoolgirls by Boko Haram was for free, the minister insisted no ransom was paid. “The girls were released unconditionally, no money changed hands. They (militants) only gave us one condition: that they will return (the girls) to where they were picked. So in the early hours of (Wednesday), they did return the girls and most of them went to their parents’ homes,” he said.

And in a subsequent interaction with journalists, the minister told them: “Once violence and confrontation were ruled out and negotiation started, there was a deliberate pause on the part of the military. In other words, it was agreed that there would be no force; there would be no confrontation. That was why it was possible for them to drop the girls. It was part of the agreement that, ‘We will release the girls, there will be no violence nor confrontation.’ And don’t forget that the lives of these children are much more important to us than any cheap victory.”

I hold that the Buhari administration was in order giving the insurgents right of way to drop off the Dapchi schoolgirls to freedom. For all practical intents, the end should justify the means. We have the Dapchi schoolgirls – well, most of them – back from the Boko Haramists, and that is what matters. The catch, though, is that the claim by principals of this administration that Boko Haram has been defeated and that it only picks on soft targets in its death throes rings too hollow now and should no longer be touted. People who swooped on a town with some security presence and harvested schoolgirls into captivity unchecked, and thereafter appropriated free passage to return with the girls like folk heroes and fade back into the shadows do not look anywhere near being defeated.

It is nonetheless hugely gratifying that the Dapchi girls are back. The prevailing mood among Nigerians since they were freed has been euphoric; and that is so infectiously so that some parents from Chibok community in Borno State, which yet has more than 100 of its own schoolgirls remaining in Boko Haram captivity since April 2014, stormed Dapchi last week to share in their joy.

Only that this also happens to be an election year and partisans, predictably so, would spare no quarter wringing political juice out of every pore. And so, whereas the Buhari administration and the ruling All Progressives Congress (APC) have basked in the achievement of retrieving the Dapchi girls from insurgents’ captivity – never mind that they ought not to have gotten there in the first place, opposition Peoples Democratic Party (PDP) under whose Goodluck Jonathan administration dawdled over the Chibok debacle has been shrill alleging sheer orchestration of the Dapchi saga for political gain.

Indications from the militants’ stated motive do not bear out either stance, though. Multiple sources in Dapchi cited the Boko Haramists saying they acted on religious sentiments and free of external influence. One eye witness of the militants’ return to the community last Wednesday was quoted in the media saying: “The insurgents were very friendly as they told residents that they had to return the girls and reunite them with their parents, having realised that 99 percent of them are Muslims and most were fasting on the day of the attack. One of the insurgents said they thought majority of the girls were infidels, hence the attack; but they later regretted their actions, and had no option than return them without collecting a dime from any government.”

It is arguable still that the Buhari administration takes some credit for the negotiations and enabling environment that brought back the Dapchi schoolgirls. Actually, some officials of government have somewhat advanced the argument. In her exhilaration on the day that the girls were freed, Foreign Affairs Minister of State Khadijat Bukar Abba, who herself hails from Yobe State, told journalists: “I am very excited today…We are very happy we have achieved what we had gone out to achieve, and we thank the Almighty God for His mercies.”

Also speaking with journalists, Defence Minister Mansur Dan-Ali, who barely a week earlier predicted imminent release of the Dapchi girls, savoured the fulfillment of his prediction. “I (did say) in two weeks, two months or less, we are going to get the girls released and this has happened…This is as result of the efforts of Mr. President and the Commander-in-Chief of the Armed Forces for the support he has been giving us, and the output is showing now,” he said.

Since most Nigerians, even those outside of government, are thrilled with the Dapchi girls’ return, no one can in good conscience begrudge the Buhari administration its relish of the incident. But the savor sucks without Leah Sharibu, the only Dapchi girl yet remaining in Boko Haram captivity.

Leah is the only Christian among the seized Dapchi girls and, at 16 years, she is a heroine of faith, having rebuffed a demand by her captors to convert to Islam before regaining her freedom. Leah’s father, Nata Sharibu, said on radio last week that the insurgents decided not to release his daughter because she refused to convert. “All the others were released, but they would not release her because she is a Christian…I am very sad, but I am jubilating too because my daughter did not denounce Christ,” he explained.

It was bad enough that Leah was taken into insurgents’ captivity alongside a throng of her schoolmates; it boggles the mind to contemplate how she must be feeling now that she remains alone in captivity. The Dapchi schoolgirls’ release is utterly inconclusive and any celebration premature on the part of government until Leah Sharibu is brought back.