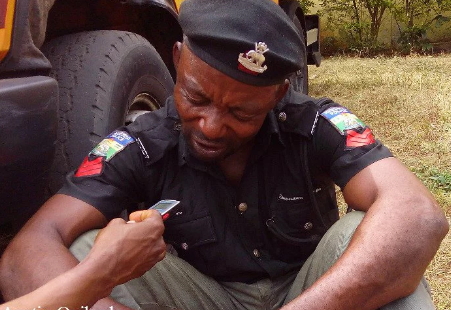 Adedeji Adeleke, a dismissed policeman standing trial for murder and stealing, has begged the Court of Appeal to grant him bail so that he would not die in prison custody.

Adedeji and four other policemen were arraigned for allegedly torturing and killing a car dealer, Benson Obode, in Benin City in 2015.

The dismissed policemen, who were serving in the Special Anti-Robbery Squad, Lagos State were also accused of collecting the sum of N330,000 from late Benson’s bank account from an ATM in Port Harcourt.

It however took the Benson’s family 63 days to locate the morgue where his corpse was deposited after he was allegedly killed.

In his application for bail supported by a two-paragraph affidavit, counsel to Adedeji, Matthew Oghogho, urged the court to grant his client bail to enable him sought proper medical attention.

Oghogho argued that what the prosecution has against his client was stealing and that the case of murder was yet to be established.

He said the accused used the deceased ATM to withdraw money to repair the vehicle being used to convey the deceased to Lagos State to face trial.

His words, “All they kept saying is that the applicant withdrew money from the victim’s account. The statement did not establish murder. There is nothing to show that my client murdered the suspect.

“The fact before the lower court is not in favour of our client. The man is ill. He may not be alive when judgment will be delivered. He needs treatment and the prison officials have said they don’t have the facilities to treat his ailment.”

But Charity Ebosele who led the prosecution team said the lower court is waiting for Adeleke to open his defence.

Ebosele informed the appellate court that previous bail applications for fundamental human rights filed by Adedeji were refused by other courts.

She said the only bail application granted by a Federal High Court has been vacated.

Ebosele said Adedeji as the leader of the police team that allegedly killed Benson want to run away and abandoned the case.

According to her, “They withdrew the money in Lagos State three days after Benson was killed. The applicant had refused to enter his defence since 2017. He is hale and healthy.

“Besides taking the deceased money, his vehicle the policemen took yet to be found. He has been complaining of ill-health since 2015.”

Justice J.O Bada who led the three-man panel of judges advised the Counsel not to get emotionally involved in cases of their clients.