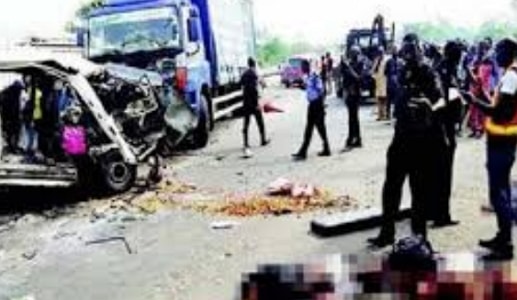 8  persons, five males and three females, have lost their lives in an accident on Tuesday morning when a Hummer bus conveying them rammed into a Mack truck.

The accident occurred around 8:40am before Sagamu by Wictech Roofing and Pipes.
It was gathered that an interstate commercial bus marked BEN313YX rammed into a truck with registration number MUS730XN killing seven people on the spot.

According to the Ogun State Sector Command of the Federal Road Safety Commission (FRSC) four women sustained injuries in the crash and were rushed to the Olabisi Onabanjo University Teaching Hospital (OOUTH).

The command’s Public Education Officer (PEO), Florence Okpe said the accident was caused as a result of over speeding by the Benin, Edo State bound commercial bus.

“The suspected cause of the crash was a speeding commercial bus travelling from Lagos going to Benin in Edo State, but rammed into the truck ahead of it.
“The total number of people involved were 14 comprising six male adults and eight female adults. The number of people injured were four females. The FRSC rescue team evacuated the injured victims to OOUTH Sagamu and the corpses deposited at the hospital mortuary.
“The FRSC Ogun State Commander, Corps Commander Clement Oladele has once again, reiterated the need for caution by drivers. Drivers are urged to always travel at recommended speed limit because life has no duplicate.
“Passengers should not abdicate their responsibility of cautioning their drivers whenever they engaged in reckless driving.”