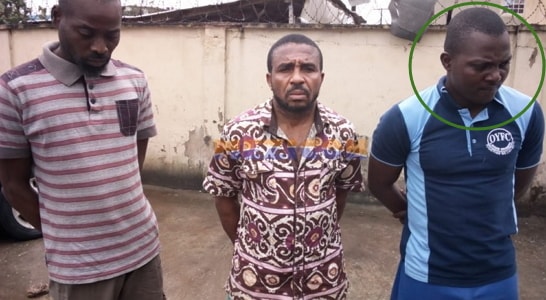 The Federal Special Anti-Robbery Squad (FSARS) operatives have arrested a dismissed soldier, Lance Corporal Peter Iwegbulam and two others for alleged diversion of a tanker laden with 45,000 litres of diesel.

Arrested alongside Iwegbulam were the alleged ring leader, Ikechukwu Ezekwe, 44, and the gang’s driver, Olarewaju Darinju.

It was gathered that the suspects had hijacked the tanker at Cele Bus Stop, along Oshodi-Apapa Expressway and drove it to Ajah to sell the diesel to a ready buyer.

The suspects were said to have accused the truck driver, his motorboy, who they trailed from a tank farm at Mile 2 to Cele; of being illegal bunkerers and marched them into their operational vehicle, while Ezekwe drove off the tanker.

According to Ezekwe, he had specific instruction from the buyer to hijack a diesel tanker, adding that the client was to pay N130/litre.

Ezekwe, a father of two, said he was the one who contracted Iwegbulam, adding that he also contacted an unnamed serving soldier, now at large.

He said he planned to collect 50 per cent of the loot and remit the rest to his accomplices.

“This is the first time I will be hijacking diesel tanker. I used to pretend to be a security personnel just to seize petroleum products from vandals.

“I initiated the plan to hijack the tanker loaded with 45,000 AGO. I invited this soldier (pointing at Iwegbulam) and another one. On the day of the operation, we waited at Mile 2 for over two hours, for tanker loaded with AGO and not petrol because the buyer insisted on AGO. By the time I sighted the truck loaded with the specified product, I told the driver to move behind it, until we got to Cele Bus Stop, where I took the tanker.

“I was already at Ajah with the buyer. But immediately he sighted the police van that blocked the truck, he zoomed off. The arrangement was for him to buy the product at N130 per litre instead of N180/N190 sold at the depot.”

Iwegbulam said he had no idea the tanker was hijacked.

“When Ikechukwu (Ezekwe) contacted me, he said I should assist him to intercept some illegal bunkerers along Oshodi-Apapa Expressway. He told me he was a tanker driver. By the time we intercepted the truck, we ordered the driver and his motorboy to enter into the taxi we used.

“Inside the taxi were another soldier, the driver and myself. When we interrogated them, they were coming from a tank farm where the product was bought. They also showed us the invoice. We drove for a while and asked them to alight when we were convinced they were not illegal bunkerers.

“By the time Ikechukwu contacted me on phone, he said I should meet him in a hotel at Alafia, only for me to discover that he had been arrested.

“I regret my action. The worst part is that I have been dismissed from the Nigerian Army because of an act I did not collect a dime for. My seven years in the Army has gone down the drain.”

Darinju also said he knew nothing about the hijack, adding that he was a cab driver called by Ezekwe to render a service.

Man Who Exhumes 3 Human Skulls At Ibadan Cemetery For Money Making Ritual Says Life Has Not Been Fair To Him
Adeniyi Johnson: I’m Not A Yoruba Actor