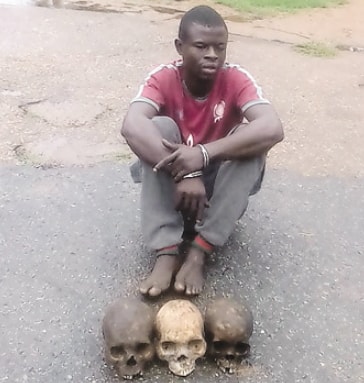 A young man identified as Sodiq Rasheed has been arrested in Ibadan for possession of 3 human skulls.

The suspect who was arrested at Idi Ayunre area of the state on the 25th of July 2018 confessed that an Islamic cleric who saw his suffering advised him to get 3 human skulls for money making ritual.

Rasheed was quoted saying life had been unfair to him having lived in poverty through out his life.

He told police that his desperate desire to break free from poverty pushed him into the act.

According to the Oyo State Police Command, the suspect who exhumed the skulls at a cemetery in Omi Adio village in Ibadan was on his way to the house of the Islamic cleric simply called Alfa Hadi when he was caught. 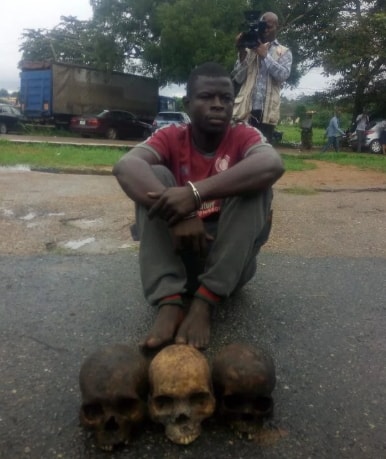 Part of his confession reads:

“I visited the cemetery at Omi-Adio and exhumed the three skulls. Alfa Hadi said three skulls would be used to make money ritual for me. I hid the skulls in a cellophane bag and on my way to the Alfa’s place, I was stopped by the police and arrested.The Alfa contracted me to cut some trees for him. He saw my suffering and, in the process, asked me if I could get the skulls for the money ritual. I agreed to do it to end my suffering”.