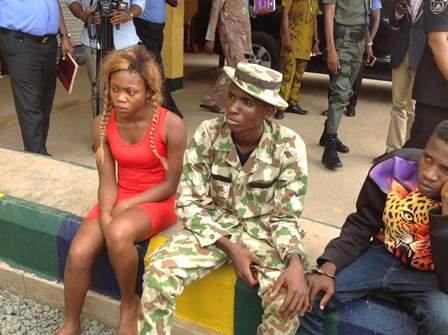 A soldier dismissed from the army after he fled the battle field due to lack of weapon has been arrested for allegedly kidnapping a man on his way home from work along Uzuakoli road in Aba.

Okezie Chukwuebuka was nabbed inside a hotel alongside his girlfriend Ugonma Arisa Kalu after one Nwadi Paul led police to their hideout.

Police recovered identity cards of victims and fidelity bank cheque belonging to one Eni Virginia Enyinnaya from the suspects.