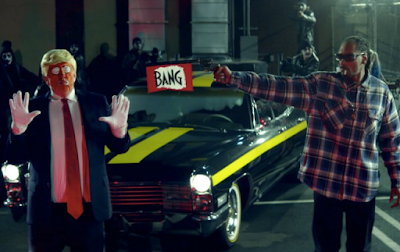 President Donald Trump blasted Snoop Dogg today  for a music video that shows the rapper shooting a gun at a clown that resembles the president.

“Can you imagine what the outcry would be if @SnoopDogg, failing career and all, had aimed and fired the gun at President Obama? Jail time!” Trump wrote on Twitter.

The video for a remix of the song “Lavender (Nightfall Remix)” shows the rapper approaching the Trump clown and pulling the trigger of a gun.

A small flag pops out of the weapon with the word “bang” as the sound of a real gun is heard in the background.

Threats to kill or injure the president are illegal under federal law and are punishable with fines or up to five years in prison.

It is unclear whether the video would be considered a violation of the law and the Secret Service told dpa only that they were aware of the video.