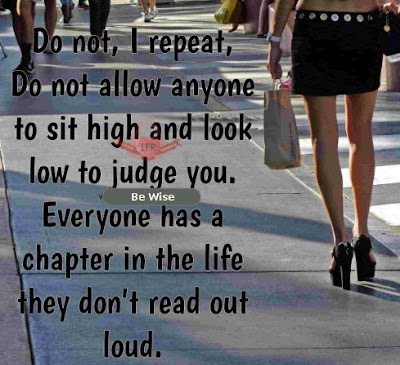 Once upon a time there were a bunch of tiny frogs who arranged a running competition. The goal was to reach the top of a very high tower. A big crowd had gathered around the tower to see the race and cheer on the contestants. The race began and in all honesty no one in the crowd really believed that the tiny frogs would reach the top of the tower. Consequently, the audience started to make comments such as, “Oh, its a difficult assignment”, “They will never make it to the top”, “Not a chance that they will succeed. The tower is too high!” and ” Get down or you will fall and die!!”

Quite prophetically, the tiny frogs began collapsing one after the other except for those, who in a fresh tempo, were climbing higher and higher. The crowd continued to yell, “It is too difficult!!! No one will make it!”. Unfortunately, more tiny frogs got tired and gave up but alas one continued higher and higher and higher. The last frog refused to be daunted by the comments of the audience and eventually reached the top. Then all of the other tiny frogs naturally wanted to know how this one frog managed to do it? A contestant therefore asked the tiny frog how he had found the strength to succeed and reach the goal and he replied him, “what did you say?”. It turned out that the winner frog was deaf and consequently didn’t hear the negative yell of the audience which facilitated the failing and falling of the other contestants. On his own, he assumed that they were encouraging him to continue.

Like the frogs’ experience, it is habitual and normal but unfortunate for people to speak idle words of support, shower fake praises and exhibit false comradeship to the fortunate that wields power but to turn back to malign, destroy and peddle damaging reports when a person is either out of political reckoning or struggling to achieve a seemingly impossible feat. Beloved, it is a truism of life that when things are good, your friends will know you but when things are bad, you will know your friends. To succeed in this world therefore, partnership with the Holy Spirit alone for leading, counsel and guidance is very principal (Psalm 40:4; 84:5; 128:1 John14:26, 1 Cor.2:10-11; 2 Cor. 3:17). Trust or dependence on man is many times shallow, deceitful, unreliable and undependable.

Jesus Christ had a similar experience at Jerusalem when He entered the temple and found “….those that sold oxen and sheep and doves, and the changers of money sitting: And when he had made a scourge of small cords, he drove them all out of the temple, and the sheep, and the oxen; and poured out the changers’ money, and overthrew the tables (John 2:14-15). Against this background, many believed in Him because of the miracles which He did. But, Jesus Christ did not commit Himself to them because He knew what was in man. Beloved in Christ, for you to get to where God has destined for you, you need to know and follow only the voice of the Holy Spirit (Hosea 4:6; Isaiah 5:13; Philippians 3:10) and be deaf to the “musicians’ praise notes” or the pessimistic cum defeatist counsel of your advisers.

Blind Bartimaeus, according to Mark 10:46-52, was not only blind but he assumed the position of deafness too when he heard that Jesus Christ was passing by. The people shouted him down when he cried out “Jesus, thou son of David, have mercy on me”; instead of heeding to their counsel, he shouted yet again but this time like that frog, he cried the more. It was that position of deafness that made Jesus Christ to stand still for him, asked him to come and healed him.

Have you been informed that you will never make it in life? Are people saying that there is no hope for you to move to that great height or that you have gone past the age of marriage or conception? Has someone lied to you that you are unfortunate or that your case is beyond redemption? Are you being shouted down by some people around as a result of a disability, meagre income, poor educational pedigree or low position at work or commission? Are people using your today to judge your tomorrow? Are people ganging up to pull you down, demean or run you down? Like that frog you must be deaf to their comments and remain focused on Jesus Christ, who is the author and finisher of your faith (Hebrew 12:2). You must also ensure that you are not discouraged by their talks because all powers are in the hands of the Almighty God (Psalm 62:11), no person has the final say but Him (Lamentations 3:37) and will surely raise you up at His appointed time (Habakkuk 2:3; Ecclesiastes 3:1).

The Almighty God who turned things around for Sarah after she has gone past childbearing age, that destroyed the yoke of delay, that frustrated medical counsel and did what eyes had not seen, ears had not heard and the miracle that was yet to come to human understanding or imagination shall do same for you (cf Genesis 21:1-3; 1 Corinthians 2:9). It doesn’t matter how heavy or strong the embargo that had been placed on your life by powers of wickedness is, I have it on His authority that it shall be removed because it is not by power or might but by His Spirit (Zechariah 4:6); and where others are failing or have failed, you shall have a testimony of awesome experiences in the name of Jesus.

Jesus Christ shall stand still for during this lenten season as He did for Bartimaeus and all that have gathered to shut you up shall gather to announce your call usame all that are turning their backs on you now and yelling that nothing good can come from you shall return to attest to the reliability of your God (Isaiah 60:15). During this Lenten season, may the Holy Spirit continue to lead you in the right path and close your ears to flattering words that will put you into trouble and terrible words that will discourage you from the chosen path of honour and greatness, in Jesus’ name

Prayer: Father, give me grace to be open to leading of the Holy Spirit and be deaf to human praises, in Jesus’ name.

Continue Reading
You may also like...
Related Topics:Judge, people, tomorrow

Do Not Be Afraid Of Change, Accept It Passionately!!!
Overcoming Discouragement: How To Pick Yourself Back Up When Life Knocks You Down